SAS programmers sometimes ask, "How do I create a design matrix in SAS?" A design matrix is a numerical matrix that represents the explanatory variables in regression models. In simple models, the design matrix contains one column for each continuous variable and multiple columns (called dummy variables) for each classification variable.

I previously wrote about how to create dummy variables in SAS by using the GLMMOD procedure to create binary indicator variables for each categorical variable. But PROC GLMMOD is not the only way to generate design matrices in SAS. This article demonstrates four SAS procedures that create design matrices: GLMMOD, LOGISTIC, TRANSREG, and GLIMMIX. (Others include PROC CATMOD and PROC GLMSELECT.) Of the four, the LOGISTIC procedure is my favorite because it provides an easy-to-use syntax and supports various parameterizations for creating design matrices.

How categorical variables are represented in a design matrix in SAS 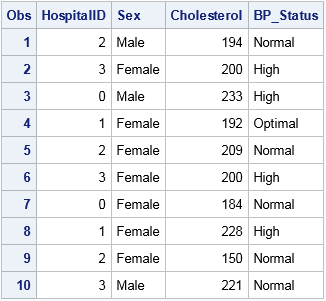 PROC GLMMOD: Design matrices that use the GLM encoding

The simplest way to create dummy variables is by using the GLMMOD procedure, which can produce a basic design matrix with GLM encoding. The GLM encoding is a singular parameterization in which each categorical variable is represented by k binary variables, where k is the number of levels in the variable. There is also an intercept column that has all 1s. The GLMMOD procedure uses a syntax that is identical to the MODEL statement in PROC GLM, so it is very easy to create interaction effects. See my previous article for an example of how to use PROC GLMMOD to create a design matrix and how the singular parameterization affects parameter estimates in regression.

You can also create a design matrix in SAS by using the LOGISTIC procedure. The PROC LOGISTIC statement supports an OUTDESIGNONLY option, which prevents the procedure from running the analysis. Instead, it only forms the design matrix and writes it to a data set. By default, PROC LOGISTIC uses the EFFECT encoding for classification variables, but you can use the PARAM= option on the CLASS statement to specify any parameterization. 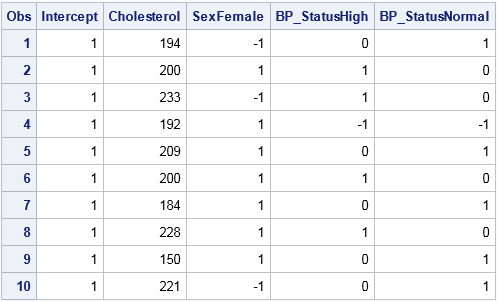 The effect encoding produces k-1 columns for a categorical variable that has k levels. This results in a nonsingular design matrix. 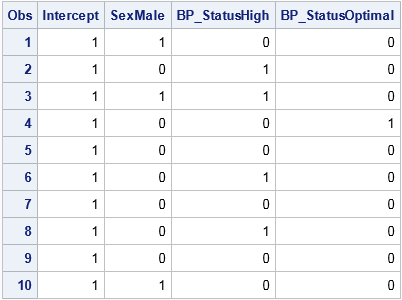 PROC TRANSREG: Design matrices and a macro for variable names

Using PROC LOGISTIC is very flexible, but it has two drawbacks: You have to create a fake response variable, and you have to look at the output data set to discover the names of the dummy variables. In contrast, PROC TRANSREG does not require that you specify a response variable when you generate the design matrix. Furthermore, the procedure creates a macro variable (&_TRGIND, for "TRANSREG indicator" variables) that contains the names of the columns of the design matrix. Another nice feature is that the output data set contains the original variables, and you can use the ID variable to output additional variables.

However, the syntax for the TRANSREG procedure is different from most other SAS regression procedures. Instead of a CLASS statement, you specify classification effects in a CLASS() transformation list. By default, the procedure uses the REFERENCE parameterization; you can use the ZERO= option to control reference levels. The procedure also supports the GLM parameterization (via the ZERO=SUM option), the EFFECT parameterization (via the EFFECT option), and other options. The following statements show an example that generates a design matrix with the effect encoding:

The output is not shown because it is identical to the EffectDesign data set in the previous section. Notice that the output is displayed by using the &_TRGIND macro variable. For details about generating design matrices, see the TRANSREG documentation section "Using the DESIGN Output Option."

PROC GLIMMIX enables you to construct two design matrices: one for the fixed effects and another for the random effects. The PROC GLIMMIX statement supports an OUTDESIGN= option that you can use to specify the output data set and a NOFIT option that ensures that the procedure will not try to fit the model. 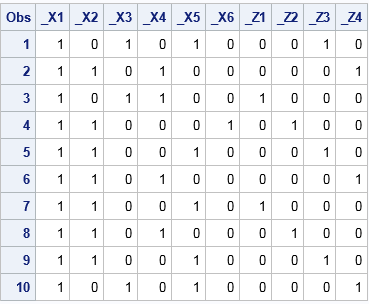 The GLIMMIX procedure uses only the GLM parameterization. Consequently, there is little advantage to using PROC GLIMMIX instead of PROC GLMMOD. You can generate the same designs by calling PROC GLMMOD twice, once for the fixed effects and once for the random effects.

In summary, SAS provides four procedures that you can use to generate design matrices for continuous variables, classification variables, and their interactions. The GLMMOD procedure is ideal for creating design matrices that use the GLM encoding. PROC LOGISTIC supports all encodings in SAS and provides an easy-to-use syntax for specifying interactions. PROC TRANSREG supports fewer parameterizations but does not require that you manufacture a response variable. Lastly, the GLIMMIX procedure produces design matrices for both fixed and random effects.

There are actually two other ways to create design matrices in SAS. For general linear models (like PROC GLM), you can use the OUTDESIGN option in the GLMSELECT procedure. If you need to use matrix computations, the SAS/IML procedure also supports creating design matrices.