A common question on SAS discussion forums is how to repeat an analysis multiple times. Most programmers know that the most efficient way to analyze one model across many subsets of the data (perhaps each country or each state) is to sort the data and use a BY statement to repeat the analysis for each unique value of one or more categorical variables. But did you know that a BY-group analysis can sometimes be used to replace macro loops? This article shows how you can efficiently run hundreds or thousands of different regression models by restructuring the data.

One model: Many samples

As I've written before, BY-group analysis is also an efficient way to analyze simulated sample or bootstrapped samples. I like to tell people that you can choose "the slow way or the BY way" to analyze many samples.

In that phrase, "the slow way" refers to the act of writing a macro loop that calls a SAS procedure to analyze one sample. The statistics for all the samples are later aggregated, often by using PROC APPEND. As I (and others) have written, macro loops that call a procedure hundreds or thousands of time are relatively slow.

As a general rule, if you find yourself programming a macro loop that calls the same procedure many times, you should ask yourself whether the program can be restructured to take advantage of BY-group processing.

Many models: One sample

There is another application of BY-group processing, which can be incredibly useful when it is applicable. Suppose that you have wide data with many variables: Y, X1, X2, ..., X1000. Suppose further that you want to compute the 1000 single-variable regression models of the form Y=Xi, where i = 1 to 1000.

One way to run 1000 regressions would be to write a macro that contains a %DO loop that calls PROC REG 1000 times. The basic form of the macro would look like this:

The OUTEST= option saves the parameter estimates in a data set. You can aggregate the statistics by using PROC APPEND or the DATA step.

If you use a macro loop to do this computation, it will take a long time for all the reasons stated in the article "The slow way or the BY way." Fortunately, there is a more efficient alternative.

The BY way for many models

An alternative way to analyze those 1000 regression models is to transpose the data to long form and use a BY-group analysis. Whereas the macro loop might take a few minutes to run, the BY-group method might complete in less than a second. You can download a test program and compare the time required for each method by using the link at the end of this article.

To run a BY-group analysis:

In order to perform a BY-group analysis in SAS, sort the data by the BY-group variable. You can use the VARNUM variable if you want to preserve the order of the variables in the wide data. Or you can sort by the name of the variable, as done in the following call to PROC SORT:

You can now call a SAS procedure one time to compute all regression models: 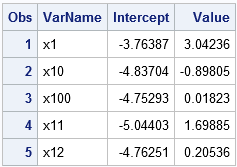 You can download the complete SAS program that generates example data and runs many regressions. The program computes the regression estimates two ways: by using a macro loop (the SLOW way) and by transforming the data to long form and using BY-group analysis (the BY way).

This technique is applicable when the models all have a similar form. In this example, the models were of the form Y=Xi, but a similar result would work for GLM models such as Y=A|Xi, where A is a fixed classification variable. Of course, you could also use generalized linear models such as logistic regression.

Can you think of other ways to use this trick? Leave a comment.