Normal, Poisson, exponential—these and other "named" distributions are used daily by statisticians for modeling and analysis. There are four operations that are used often when you work with statistical distributions. In SAS software, the operations are available by using the following four functions, which are essential for every statistical programmer to know:

The probability density function is the function that most people use to define a distribution. For example, the PDF for the standard normal distribution is φ(x) = (1/ √2π ) exp(-x2/2). You can use the PDF function to draw the graph of the probability density function. For example, the following SAS program uses the DATA step to generate points on the graph of the standard normal density, as follows: 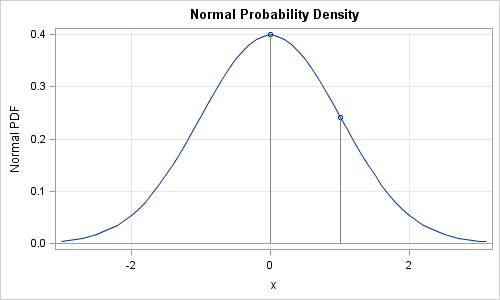 The mathematical basis for statistics is probability. The cumulative distribution function returns the probability that a value drawn from a given distribution is less than or equal to a given value. 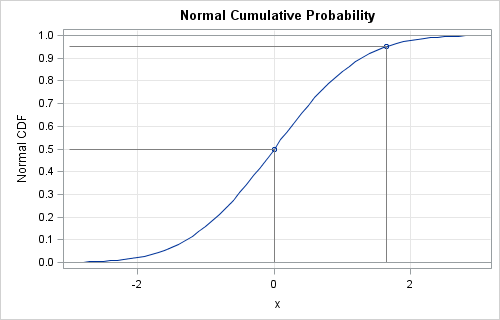 For the standard normal distribution, the quantile of 0.5 is 0, and the 95th percentile is 1.645. You can find a quantile graphically by using the CDF plot: choose a value q between 0 and 1 on the vertical axis, then use the CDF curve to find the value of x whose CDF is q.

Random samples with the RAND function

The RAND function (and the RANDGEN subroutine in the SAS/IML language) enables you to generate a random sample from a given distribution. I have written about random samples many times, including a recent post on random number streams in SAS. The following DATA step calls the STREAMINIT subroutine to set a random number stream and samples 100 random values from the standard normal distribution. (If you use SAS/IML, the analogous subroutines are RANDSEED and RANDGEN.) A histogram of the results follows: 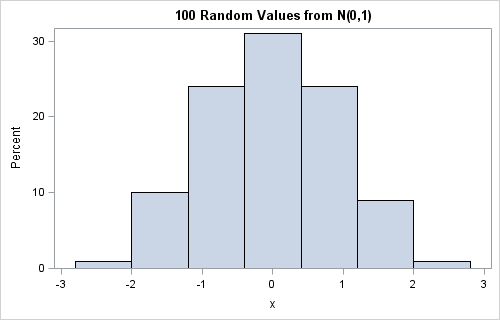 Comparison with other languages

Long-time SAS users might remember the older PROBXXX, XXXINV, and RANXXX functions for computing the CDF, inverse CDF (quantiles), and for sampling. For example, you can use the PROBGAM, GAMINV, and RANGAM functions for working with the gamma distribution. (For the normal distribution, the older names are PROBNORM, PROBIT, and RANNOR.) Because the older RANXXX functions use an older random number generator, I do not recommend them for generating many millions of random values.