Gauss' shoelace formula for the area of a polygon 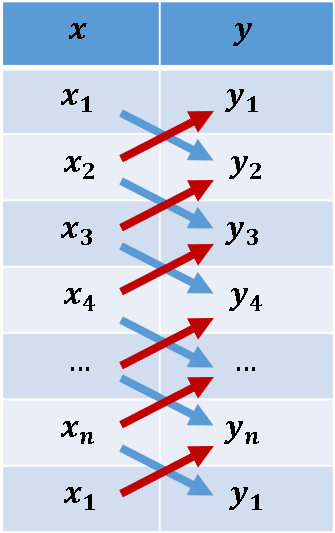 To me, the remarkable thing about this formula is that it looks like it has nothing to do with an area. However, the Appendix derives Gauss' shoelace formula from Green's theorem in the plane, which reveals the connection between the formula and the area of the polygon.

You might wonder why this is called the "shoelace formula." Suppose a polygon has vertices \((x_1, y_1), (x_2, y_2), \ldots, (x_n, y_n)\). A schematic visualization of the formula is shown to the right. You list the X and Y coordinates of the vertices and append the first vertex to the end of the list. The blue arrows represent multiplication. The red arrows represent multiplication with a negative sign. So, the first two rows indicate the quantity \(x_1 y_2 - x_2 y_1\). (If you are familiar with linear algebra, you can recognize this quantity as the determinant of the 2 x 2 matrix with first row \((x_1, y_1)\) and second row \((x_2, y_2)\).) The sequence of arrows looks like criss-cross lacing on a shoe.

Implementing the area and perimeter of a polygon in SAS

Apply the area and perimeter formulas to convex hulls

You can use the previous functions to compute the area and perimeter of the 2-D convex hull of a set of planar points. In SAS, you can use the CVEXHULL function to compute a convex hull. The CVEXHULL function returns the indices of the points on the convex hull in counterclockwise order. You can therefore extract those points to obtain the polygon that encloses the points. You can send this polygon to the functions in the previous section to obtain the area and perimeter of the convex hull, as follows:

The output shows the indices and coordinates of the convex polygon that bounds the set of points. It is a two-column matrix, where each row represents the coordinates of a vertex of the polygon. The area of this polygon is 15 square units. The perimeter is 15.71 units. If these coordinates are the locations of spatial observations, you can compute the area and perimeter of the convex hull that contains the points.

At first glance, Gauss' shoelace formula does not appear to be related to areas. However, the formula is connected to area because of a result from multivariable calculus known as "the area corollary of Green's theorem in the plane." Green's theorem enables you to compute the area of a planar region by computing a line integral around the boundary of the region. That is what is happening in Gauss' shoelace formula. The "area corollary" says that you can compute the area of the polygon by computing \(\oint_C x/2\; dx - y/2\; dy\), where C is the piecewise linear path along the perimeter of the polygon.