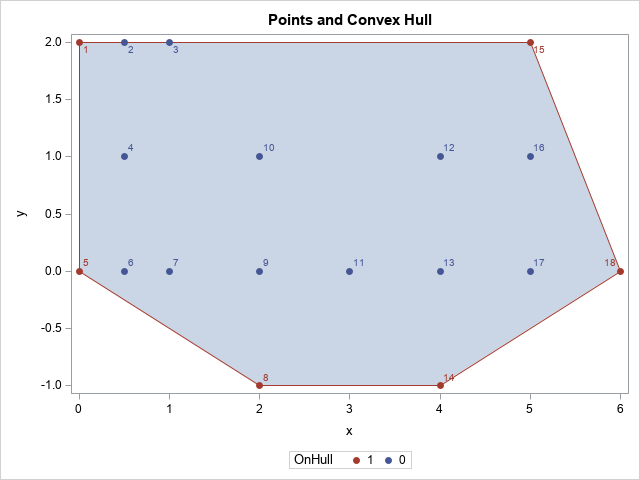 This article describes the CVEXHULL function in the SAS/IML language, which computes the convex hull for a set of planar points.

How to compute a 2-D convex hull in SAS

The following example comes from the SAS/IML documentation. The data matrix contains 18 points. Of those, six are the vertices of the convex hull. The output of the CVEXHULL function is shown below:

I have highlighted the first six elements. The indices tell you that the convex hull is formed by using the 1st, 5th, 8th, 14th, 18th, and 15th points of the data matrix. You can use the LOC statement to find the positive values in the Indices vector. You can use those values to extract the points on the convex hull, as follows:

The graph at the beginning of this article shows the convex hull as a shaded polygon. The original points are overlaid on the polygon and labeled by the observation number. The six points that form the convex hull are colored red. This section shows how to create the graph.

The graph uses the POLYGON statement to visualize the convex hull. This enables you to shade the interior of the convex hull. If you do not need the shading, you could use a SERIES statement, but to get a closed polygon you would need to add the first point to the end of the list of vertices.

To create the graph, you must write the relevant information to a SAS data set so that you can use PROC SGPLOT to create the graph. The following statements write the (x,y) coordinates of the point, the observation numbers (for the data labels), the coordinates of the convex hull vertices (cx, cy), and an ID variable, which is required to use the POLYGON statement. It also creates a binary indicator variable that is used to color-code the markers in the scatter plot:

In the graph at the top of this article, vertices of the convex hull are colored red and the other points are blue. When you use the GROUP= option in PROC SGPLOT statements, the group colors might depend on the order of the observations in the data. To ensure that the colors are consistent regardless of the order of the data set, you can use a discrete attribute map to associate colors and values of the grouping variable. For details about using a discrete attribute maps, see Kuhfeld's 2016 article.

The graph is shown at the top of this article. Notice that the points (0.5, 2) and (1, 2) are on the boundary of the convex hull, but they are drawn in blue because they are not vertices of the polygon.

In summary, you can compute a 2-D convex hull by using the CVEXHULL function in SAS/IML software. The output is a set of indices, which you can use to extract the vertices of the convex hull and to color-code markers in a scatter plot.

By the way, there is a hidden message in the graph of the convex hull. Can you see it? It has been hiding in the SAS/IML documentation for more than 20 years.