I recently showed how to represent positive integers in any base and gave examples of base 2 (binary), base 8 (octal), and base 16 (hexadecimal). One fun application is that you can use base 26 to associate a positive integer to every string of English characters. This article shows how to use base 26 to map integers to strings and vice versa. Here's a sneak peek: the string CAT (base 26) is associated with the integer 2398 (base 10).

For any base b, you can express an integer as a sum of powers of b, such as
\(\sum\nolimits_{i=0}^p {c_i} b^i\)
where the \(c_i\) are integers \(0 \leq c_i < b\). From the coefficients, you can build a string that represents the number in the given base. Traditionally, we use the symbols 0, 1, ..., 9 to represent the first 10 coefficients and use letters of the English alphabet for higher coefficients. However, in base 26, it makes sense to break with tradition and use English characters for all coefficients. This is done in a natural way by associating the symbols {A, B, C, ..., Z} with the coefficient values {0, 1, 2, ..., 25}. Notice that the symbols for the coefficients in base 26 are zero-based (A=0) and not one-based (A≠1), which is different than you might have seen in other applications.

Recall that for base 10 numbers, we typically do not write the numbers with leading zeros. For example, when considering three-digit numbers in base 10, we do not write the numbers 0-99. But if we use leading zeros, we can write these integers as three-digit numbers: 000, 001, 002, ..., 099. In a similar way, you can represent all three-character strings in base 26 (such as AAA, ABC, and ANT) if you include one or more leading zeros. In base 26, a "leading zero" means that the string starts with A. Unfortunately, if you include leading zeros, you lose a unique representation of the integers because A = AA = AAA, and similarly Z = AZ = AAZ. However, it is a small price to pay. To represent character strings that start with the letter A, you must allow leading zeros.

A SAS program to represent integers in base 26

The following statements put a few integers in the range [0, 17575] into a SAS data set:

The following DATA step converts these integers to three-character strings in base 26. 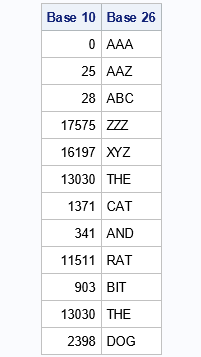 After converting a few arbitrary base 10 numbers to base 26, I show a few special numbers that correspond to three-character English words. The last seven numbers in the data set are integers that, when represented in base 26, correspond to the sentence THE CAT AND RAT BIT THE DOG!

For compactness, I will use SAS/IML software to compute the integer value for each base 26 representation. You could use the DATA step, if you prefer. The SAS/IML language supports a little-known feature (the MATTRIB statement) that enables you to index a matrix by using a string instead of an integer. This enables you to put the decimal numbers 0-25 into an array and index them according to the corresponding base 26 characters. This feature is demonstrated in the following example:

The output shows the base 10 representation for a set of three-digit base 26 strings. These are the values that I used in the first part of this article. (NOTE: You can vectorize this program and eliminate the inner loop! I leave that as an exercise.)