For example, the following statements read the names and populations (in 2005) of 197 countries into SAS/IML vectors:

You can use the MATTRIB statement to assign the names of countries to the rows of the Pop matrix. You can then subset the rows by using a character array of names, as follows: 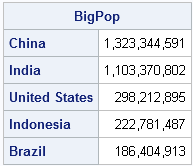 Using names rather than indices can make a program more readable. For example, to find the population of a continent, you can add up the populations of the countries in the continent:

Of course, for many data analysis tasks, you don't want to hard-code the observations, but want to compute them by using some sort of query. For example, you might be interested in the populations of island nations. To find all countries that have the word "islands" as part of their name and print their populations, run the following statements:

Using the MATTRIB function to assign row names or column names can result in readable code. However, it isn't as efficient as directly accessing the indices of a matrix, so I would usually extract the populations of island nations by using Pop[idx].