Recently, I wrote about Bartlett's test for sphericity. The purpose of this hypothesis test is to determine whether the variables in the data are uncorrelated. It works by testing whether the sample correlation matrix is close to the identity matrix.

Often statistics textbooks or articles include a statement such as "under the null hypothesis, the test statistic is distributed as a chi-square statistic with DF degrees of freedom." That sentence contains a lot of information! Using algebraic formulas and probability theory to describe a sampling distribution can be very complicated. But it is straightforward to describe a sampling distribution by using simulation and statistical graphics.

The simulation approach to null distributions

Simulation is well-suited for explaining the sampling distribution of a statistic under the null hypothesis. For Bartlett's sphericity test, the null hypothesis is that the data are a random sample of size N from a multivariate normal population of p uncorrelated variables. Equivalently, the correlation matrix for the population is the p x p identity matrix. Under this hypothesis, the test statistic
\(T = -\log(\det(R)) (N-1-(2p+5)/6)\)
has a chi-square distribution with p(p–1)/2 degrees of freedom, where R is the sample correlation matrix. In other words, if we randomly sample many times from an uncorrelated MVN distribution, the statistics for each sample will follow a chi-square distribution. Let's use simulation to visualize the null distribution for Bartlett's test.

The output shows one random covariance matrix (C) and its associate correlation matrix (R) from among the 1,000 random matrices. The B matrix is 10000 x 9, and each row is a sample covariance matrix for a MVN(0, Σ) sample that has N=50 observations.

Recall that the determinant of a correlation matrix is always in [0,1]. The determinant equals 1 only when R=I(p). Therefore, the expression -log(det(R)) is close to 0 when R is close to the identity matrix and gets more and more positive as R is farther and farther away from the identity matrix. (It is undefined if R is singular.) So if we apply Bartlett's formula to each of the random matrices, we expect to get a lot of statistics that are close to 0 (because R should be close to the identity) and a few that are far away. The following SAS IML program carries out this method and plots the 10,000 statistics that result: 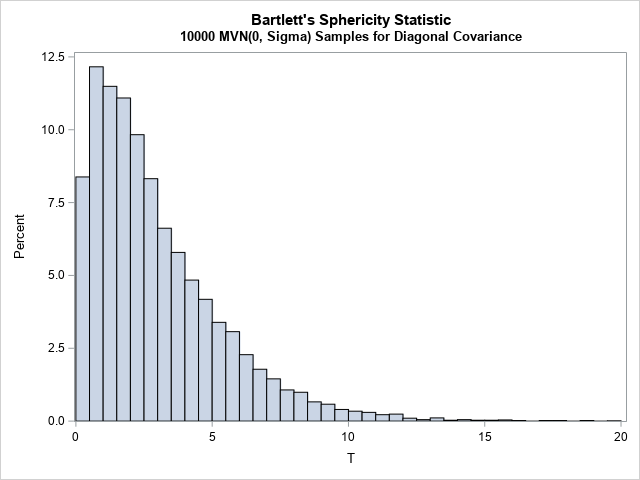 The histogram shows the null distribution, which is the distribution of Bartlett's statistic under the null hypothesis. As expected, most statistics are close to 0. Only a few are far from 0, where "far" is a relative term that depends on the dimension of the data (p).

Knowing that the null distribution is a chi-square distribution with DF=p(p-1)/2 degrees of freedom helps to provide a quantitative value to "far from 0." You can use the 95th percentile of the chi-square(DF) distribution to decide whether a sample correlation matrix is "far from 0":

You can overlay the chi-square(3) distribution on the null distribution and add the critical value to obtain the following figure: 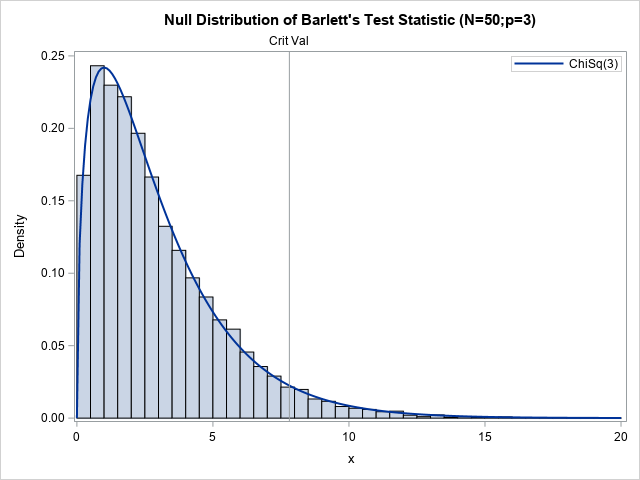 The previous graph shows the null distribution. If you run the test on a sample that contains three variables and 50 observations, you will get a value of the test statistic. If the value is greater than 7.8, it is unlikely that the data are from an uncorrelated multivariate normal distribution.

A previous article showed how to use PROC FACTOR to run Bartlett's test in SAS. Let's run PROC FACTOR on 50 observations and three variables of Fisher's Iris data:

When researchers see this result, they often assume that one or more variables in the data are correlated. However, it could also be the case that the data are not multivariate normal since normality is an assumption that was used to generate the null distribution.

The ideas in this article apply more generally to other hypothesis tests. An important use of simulation is to approximate the null distribution for tests when an exact form of the distribution is not known.