Many applications in mathematics and statistics require the numerical computation of the derivatives of smooth multivariate functions. For simple algebraic and trigonometric functions, you often can write down expressions for the first and second partial derivatives. However, for complicated functions, the formulas can get unwieldy (and some applications do not have explicit analytical derivatives). In those cases, numerical analysts use finite-difference methods to approximate the partial derivatives of a function at a point of its domain. This article is about how to compute first-order and second-order finite-difference derivatives for smooth functions in SAS.

This article shows how to compute finite-difference derivatives for a smooth scalar-valued function f: Rn → R at a point x0 in its domain. The first derivatives are the elements of the gradient vector, grad(f). The i_th element of the gradient vector is ∂f / ∂xi for i = 1, 2, ..., n. The second derivatives are the elements of the Hessian matrix, Hes(f). The (i,j)th element of the Hessian matrix is ∂2f / ∂xixj for i,j = 1, 2, ..., n. For both cases, the derivatives are evaluated at x0, so grad(f)(x0) is a numerical row vector and Hes(f)(x0) is a numerical symmetric matrix. 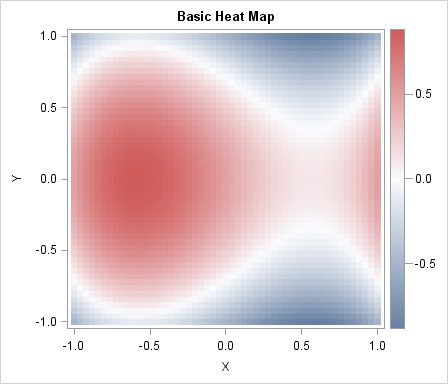 Use finite-difference derivatives to classify extrema

For the current example, the Hessian is a diagonal matrix. By inspection, the eigenvalues are all negative, which proves that the point x0 = (-1/sqrt(3), 0) is a local maximum. You can repeat the computations for x_s = 1/sqrt(3) || 0, which is a saddle point. 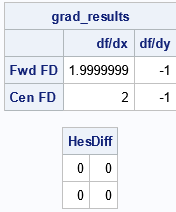