As I discussed in a previous article, the simple block bootstrap is a way to perform a bootstrap analysis on a time series. The first step is to decompose the series into additive components: Y = Predicted + Residuals. You then choose a block length (L) that divides the total length of the series (n). Each bootstrap resample is generated by randomly choosing from among the non-overlapping n/L blocks of residuals, which are added to the predicted model.

The simple block bootstrap is not often used in practice. One reason is that the total number of blocks (k=n/L) is often small. If so, the bootstrap resamples do not capture enough variation for the bootstrap method to make correct inferences. This article describes a better alternative: the moving block bootstrap. In the moving block bootstrap, every block has the same block length but the blocks overlap. The following figure illustrates the overlapping blocks when L=3. The indices 1:L define the first block of residuals, the indices 2:L+1 define the second block, and so forth until the last block, which contains the residuals n-L+1:n.

To form a bootstrap resample, you randomly choose k=n/L blocks (with replacement) and concatenate them. You then add these residuals to the predicted values to create a "new" time series. Repeat the process many times and you have constructed a batch of bootstrap resamples. The process of forming one bootstrap sample is illustrated in the following figure. In the figure, the time series has been reshaped into a k x L matrix, where each row is a block. 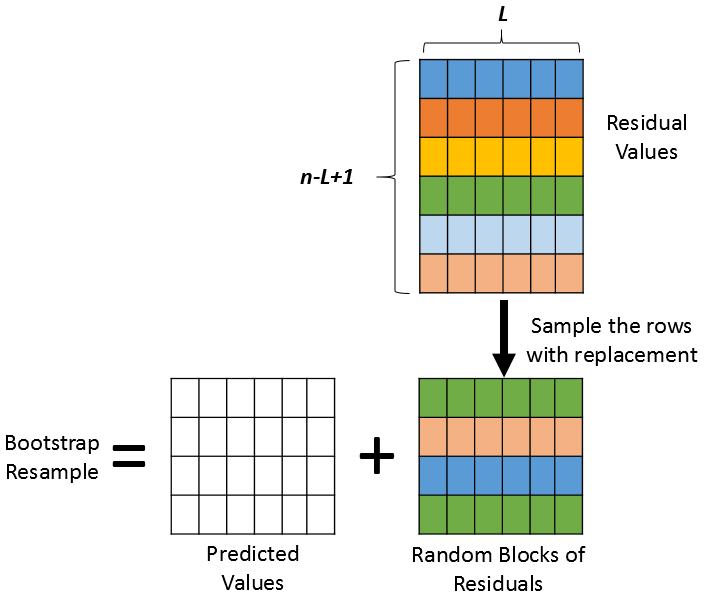 The moving block bootstrap in SAS

To demonstrate the moving block bootstrap in SAS, let's use the same data that I analyzed in the previous article about the simple block bootstrap. The previous article extracted 132 observations from the Sashelp.Air data set and used PROC AUTOREG to form an additive model Predicted + Residuals. The OutReg data set contains three variables of interest: Time, Pred, and Resid.

As before, I will choose the block size to be L=12. The following SAS/IML program reads the data and defines a matrix (R) such that the i_th row contains the residuals with indices i:i+L-1. In total, the matrix R has n-L+1 rows.

With this setup, the formation of bootstrap resamples is almost identical to the program in the previous article. The only difference is that the matrix R for the moving block bootstrap has more rows. Nevertheless, each resample is formed by randomly choosing k rows from R and adding them to a block of predicted values. The following statements generate B=1000 bootstrap resamples, which are written to a SAS data set (BootOut). The program writes the Time variable, the resampled series (YBoot), and an ID variable that identifies each bootstrap sample.

The BootOut data set contains B=1000 bootstrap samples. The rest of the bootstrap analysis is exactly the same as in the previous article.

This article shows how to perform a moving block bootstrap on a time series in SAS. First, you need to decompose the series into additive components: Y = Predicted + Residuals. You then choose a block length (L), which must divide the total length of the series (n), and form the n-L+1 overlapping blocks of residuals. Each bootstrap resample is generated by randomly choosing blocks of residuals and adding them to the predicted model. This article uses the SAS/IML language to perform the simple block bootstrap in SAS.

You can download the SAS program that shows the complete analysis for both the simple block and moving block bootstrap.