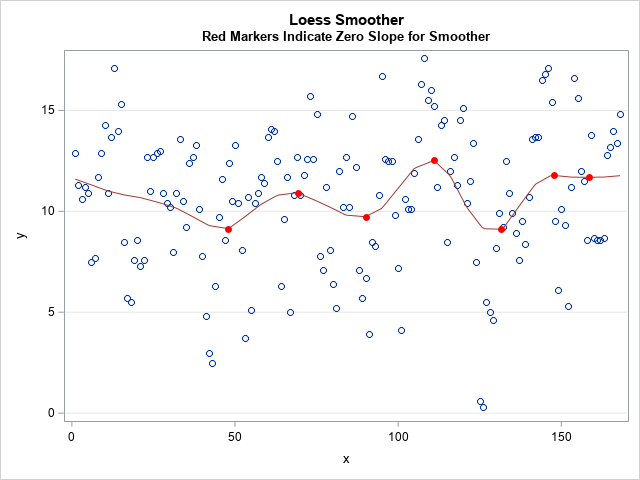 This article shows how to find local maxima and maxima on a regression curve, which means finding points where the slope of the curve is zero. An example appears at the right, which shows locations where the loess smoother in a scatter plot has local minima and maxima. Except for simple cases like quadratic regression, you need to use numerical techniques to locate these values.

In this article, I use the LOESS procedure to demonstrate the technique, but the method applies equally well to any one-dimensional regression curve. There are several ways to score a regression model:

The technique in this article will not detect inflection points. An inflection point is a location where the curve has zero slope but is not a local min or max. Consequently, this article is really about "how to find a point where a regression curve has a local extremum," but I will use the slightly inaccurate phrase "find points where the slope is zero."

How to find locations where the slope of the curve is zero?

For convenience, I assume the explanatory variable is named X and the response variable is named Y. The goal is to find locations where a nonparametric curve (x, f(x)) has zero slopes, where f(x) is the regression model. The general outline follows:

SAS distributes the ENSO data set in the SASHelp library. You can create a DATA step view that renames the explanatory and response variables to X and Y, respectively, so that it is easier to follow the logic of the program:

Create a grid of points

Score the model at the grid locations

Find the locations where the slope is zero

This is the mathematical portion of the computation. You can use a backward difference scheme to estimate the derivative (slope) of the curve. If (x0, y0) and (x1, y1) are two consecutive points along the curve (in the ScoreOut data set), then the slope at (x1, y1) is approximately m = (y1 - y0) / (x1 - x0). When the slope changes sign between consecutive points, it indicates that the slope changed from positive to negative (or vice versa) between the points. If the slope is continuous, it must have been exactly zero somewhere on the interval. You can use a linear approximation to find the point, t, where the slope is zero. You can then use linear interpolation to approximate the point (t, f(t)) at which the curve is a local min or max.

You can use the following SAS DATA step to process the scoring data, approximate the slope, and estimate where the slope of the curve is zero: 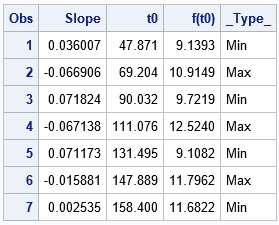 The table shows that there are seven points at which the derivative of the loess regression curve has a local min or max.

In summary, if you can evaluate a regression curve on a grid of points, you can approximate the slope at each point along the curve. By looking for when the slope changes sign, you can find local minima and maxima. You can then use a simple linear estimator on the interval to estimate where the slope is exactly zero.

You can download the SAS program that performs the computations in this article.