What is a random-number generator?

A random-number generator usually refers to a deterministic algorithm that generates uniformly distributed random numbers. The algorithm (sometimes called a pseudorandom-number generator, or PRNG) is initialized by an integer, called the seed, which sets the initial state of the PRNG. Each iteration of the algorithm produces a pseudorandom number and advances the internal state. The seed completely determines the sequence of random numbers. Although it is deterministic, a modern PRNG generates extremely long sequences of numbers whose statistical properties are virtually indistinguishable from a truly random uniform process.

An RNG can also refer to a hardware-based device (sometimes called a "truly random RNG") that samples from an entropy source, which is often thermal noise within the silicon of a computer chip. In the Intel implementation, the random entropy source is used to initialize a PRNG in the chip, which generates a short stream of pseudorandom values before resampling from the entropy source and repeating the process. A hardware-based RNG is not deterministic or reproducible.

An RNG generates uniformly distributed numbers. If you request random numbers from a nonuniform probability distribution (such as the normal or exponential distributions), SAS will automatically apply mathematical transformations that convert the uniform numbers into nonuniform random variates.

For these techniques to be statistically valid, the values that are produced by statistical software must contain a high degree of randomness. The new random-number generators in SAS provide analysts with fast, high-quality, state-of-the-art random numbers.

Choose a random-number generator in SAS

If you want to use the default RNG (which is 'MTHYBRID'), you can specify only the seed. For example, the following DATA step initializes the default PRNG with the seed value 12345 and then generates five observations from the uniform distribution on (0,1) and from the standard normal distribution:

If you want to choose a different RNG, you can specify the name of the RNG followed by the seed. For example, the following DATA step initializes the PCG method with the seed value 12345 and then generates five observations from the uniform and normal distributions:

A hardware-based method is initialized by the entropy source, so you do not need to specify a seed value. For example, the following DATA step initializes the RDRAND method and then generates five observations. The three data sets are then merged and printed: 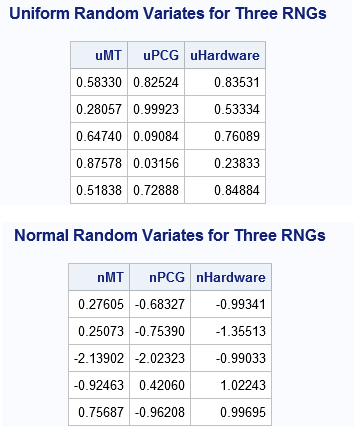 In SAS 9.4M5, you can choose from eight different random-number generators. You use the STREAMINIT function to select the RNG and use the RAND function to obtain random values. In a future blog post, I will compare the attributes of the different RNGs and discuss the advantages of each. I will also show how to use the new random-number generators to generate random numbers in parallel by running a DS2 program in multiple threads.

The information in this article is taken from my SAS Global Forum 2018 paper, "Tips and Techniques for Using the Random-Number Generators in SAS" (Sarle and Wicklin, 2018).