In a previous post I described how to simulate random samples from an urn that contains colored balls. The previous article described the case where the balls can be either of two colors. In that csae, all the distributions are univariate. In this article I examine the case where the urn contains c > 2 colors, which leads to multivariate distributions.

If you repeat the experiment n times (replacing the selected ball after recording its value), you obtain a c-tuple of counts. Let ki be the number of times that a ball of color i was selected. Then the result of n draws with replacement is the vector (k1, k2, ..., kc) where Σ ki = n.

A standard technique for drawing a sample from multiple categories is to reduce the problem to a series of two-category problems by combining colors (Gentle, 2003, p. 206). You can obtain a random number of balls drawn from the first color category by using the hypergeometric distribution with K1 balls of the first color and N - K1 balls in the "other" category. Suppose that k1 balls of the first color are selected. For the second step, there are N - K1 balls of the other colors in the urn and n - k1 balls left to draw. Repeat this process with the second color category. Use the hypergeometric distribution to draw k2 balls of the second color. That leaves (N - K1 - K2) balls of the remaining colors in the urn and (n - k1 - k1) balls left to draw. Continue this process to obtain counts for all the categories.

The following SAS/IML function can return multiple draws from the multivariate hypergeometric distribution. The function is efficient because it exploits the fact that you can pass vectors of parameters to the RANDGEN subroutine. The RandMVHyper function uses a vector of N's (ItemsLeft) and a vector of n's (nDraw) to generate an arbitrary number of independent draws from the multivariate hypergeometric distribution. There is no loop over the number of replications. The only loop is over the number of colors, which is necessary because that loop updates the selection probabilities. (If you study the code, you might want to mentally set nRep = 1 so that the vectors of parameters become scalar quantities.) 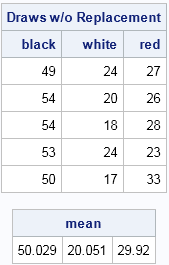 The test code requests 1,000 replicates. Each replicate is a random vector from the multivariate hypergeometric distribution, namely the result of drawing 100 balls without replacement from an urn that contains 100 black balls, 40 white balls, and 60 red balls. The table shows the first five results. For example, the fourth experiment resulted in 53 black, 24 white, and 23 red balls. Each row sums to 100, which is the number of balls drawn for each experiment. The average counts from the 1,000 experiments were approximately 50 black ball, 20 white balls, and 30 red balls. These are the expected values.

The RandMVHyper function handles most cases, but it can break down when the sample size is small and when some categories (colors) have small marginal sums. You can download a more robust version of the function that handles these edge cases.