As I was reviewing notes for my course "Data Simulation for Evaluating Statistical Methods in SAS," I realized that I haven't blogged about simulating categorical data in SAS. This article corrects that oversight.

An Easy Way and a Harder Way

SAS software makes it easy to sample from discrete "named" distributions. For example, the binomial, geometric, negative binomial, and Poisson distributions are all available by calling the RAND function in the DATA step or the RANDGEN subroutine in the SAS/IML language. The challenge comes when you want to sample from a finite set of k elements and the probability of selecting the ith element is pi, where Σi pi = 1.

There is an easy way to do this and a harder way. The harder way is to divide the interval [0,1] into k subintervals of lengths pi, and generate a random uniform variable, u on [0,1]. You choose the ith element when u lands in the ith subinterval.

I used this method for about 10 years before I discovered that there is an easier way: use the "Table distribution." I had often seen the documentation for this distribution, but I assumed it was some obscure statistical distribution that I had never heard of. It never sunk in that this "distribution" was intended to sample categorical data with a known set of sampling probabilities. To be explicit:

The "Table" distribution enables you to specify the sampling probabilities that are associated with each of k events, and to draw randomly from those events.

In the remainder of this article, I show how to use the "Table" distribution to sample from a discrete set of events. For further details, see Chapter 13 (p. 322) of my book, Statistical Programming with SAS/IML Software.

Simulation of Categorical Data by Using the DATA Step

You can use the RAND function in the SAS DATA step to simulate this process. The following statements simulate drawing 10,000 items. The results are stored in the SAMPLE data set.

In either case, you can use PROC FREQ or PROC SGPLOT to visualize the sampled data. The following graph shows that the percentages of the three items in the sample are very close to 50%, 20%, and 30%: 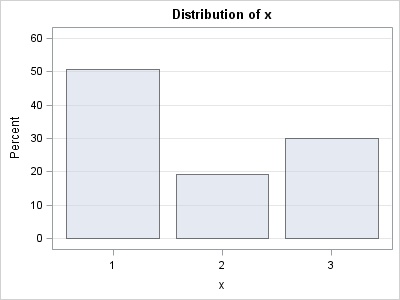 Simulation of Categorical Data by Using the SAS/IML Language

The program statements are similar, but in the SAS/IML language you use the RANDSEED function to set the random number seed and the RANDGEN function to fill an entire matrix of values in a single call:

The SAS/IML statements generate 10,000 random integers from the set {1,2,3} and pack those values into a 10x1000 matrix. This arrangement is convenient for estimating probabilities that are associated with the experiment "choose 10 socks with replacement." (See my Sampling with Replacement article for more details.) You can use this simulation to answer questions such as "how often will the sample contains fewer than 2 black socks?"

I cover this technique and many others in my course "Data Simulation for Evaluating Statistical Methods in SAS," which I first presented at SAS Global Forum 2010. I am repeating the course at the following two conferences: