While at SAS Global Forum 2014 I attended a talk by Jorge G. Morel on the analysis of data with overdispersion. (His slides are available, along with a video of his presentation.) The Wikipedia defines overdispersion as "greater variability than expected from a simple model." For count data, the "simple model" is the Poisson model, for which the variance equals the mean. Morel pointed out that the variance of count data is often greater than is permitted under a Poisson model, so more complicated models must be used.

In school I learned that the negative binomial is the distribution of the number of failures before k successes in a sequence of independent Bernoulli trials, which doesn't seem to be related to a Poisson distribution. To better understand Morel's talk, I wrote a SAS/IML program that simulates a random variable drawn from a Poisson(λ) distribution, where λ is drawn from a gamma distribution. The program shows off a feature of SAS/IML 12.1, namely that you can pass vectors of parameters as arguments to the RANDGEN subroutine. Here is the program: 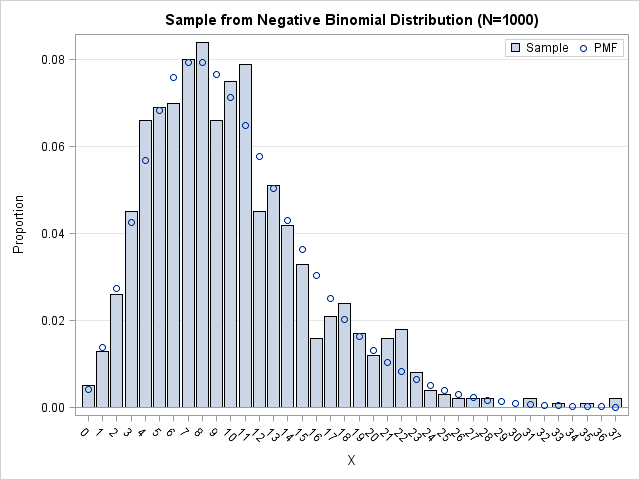 Upon doing further reading I learned that the compound distribution definition of the NB is favored by the insurance industry. Each policy holder has a different risk of getting in an accident, so the rate of claims (the λ parameter) is treated as random. The gamma distribution is a flexible way to model the distribution of risks in the population.