If not for probability theory, urns would appear only in funeral homes and anthologies of British poetry.

This article describes some ball-and-urn experiments, and how you can use SAS software to simulate drawing balls from an urn under various assumptions. This article describes the case where the urn contains exactly two colors, often chosen to be black and white. A subsequent article will describe the case where the urn contains more than two colors.

The simplest experiment is to reach into the urn and pull out a single ball. Although there are two kinds of balls, the act of drawing one ball depends only on one parameter, namely the probability of choosing a white ball, which is p = K1 / N. (Similarly, the ball will be black with probability 1–p.) This is called a Bernoulli trial. In SAS the Bernoulli distribution is supported by the four essential functions for probability and sampling: the PDF, CDF, QUANTILE, and RAND functions.

For example, the following DATA step repeats 100 independent Bernoulli trials and plots the results for an urn in which 75% of the balls are white. "Independence" means that after each trial, the selected ball is returned to the urn, and the urn is thoroughly mixed. The only parameter for the Bernoulli distribution is the probability of selecting a white ball: 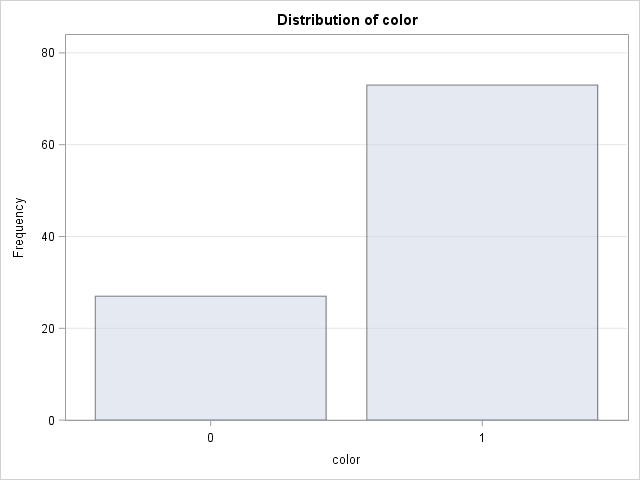 The following DATA step uses the hypergeometric distribution to draw a sample of 100 balls from an urn that contains 120 balls, 90 of which are white. For this distribution it is necessary to specify three parameters: the total number of balls (N), and the initial number of white balls (K1), and the sample size (n).

There are other discrete probability functions that can model ball-and-urn experiments in which the question is "how many trials do you need until" some event occurs: