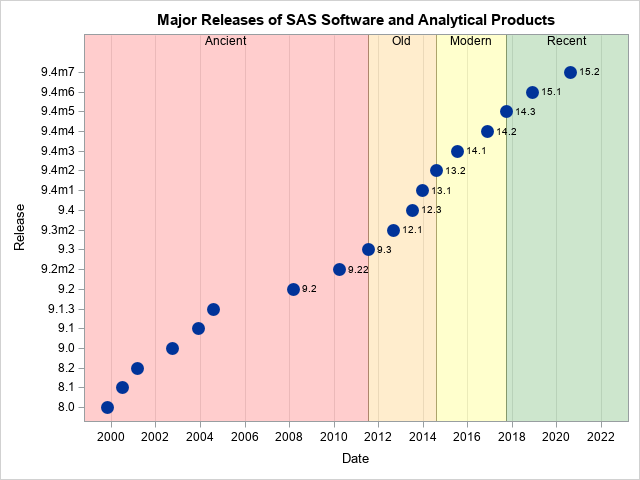 As this graph demonstrates, SAS software is always evolving. Each release includes features that simplify tasks that used to be more difficult. For example, this graph demonstrates a new feature of SAS 9.4: The colors in the background of the graph are specified by using the STYLEATTRS statement in the SGPLOT procedure. This new feature makes creating the graph easier and faster. Earlier versions of SAS required a more complicated syntax to specify colors for groups.

Recently a SAS user asked me how to compute some quantity in SAS. But before I could respond, he added, "By the way, I'm still running SAS 9.1."

That addendum certainly changed my response. The solution in SAS 9.1 was complicated. A feature added to SAS 9.2 simplifies the solution. Unfortunately, the customer could not yet take advantage of the simpler approach.

At SAS Global Forum 2012, Senior Vice President of R&D Keith Collins invited the attendees to "come along with us" as SAS releases new versions of its software. Of course, in large corporations this is sometimes easier said than done. However, if you want to start a conversation at your company about upgrading to a more recent version of SAS, this graph helps to put the SAS release numbers in a historical context.

Editor's Note: This post was revised in August 2020 to include the latest release of SAS software.