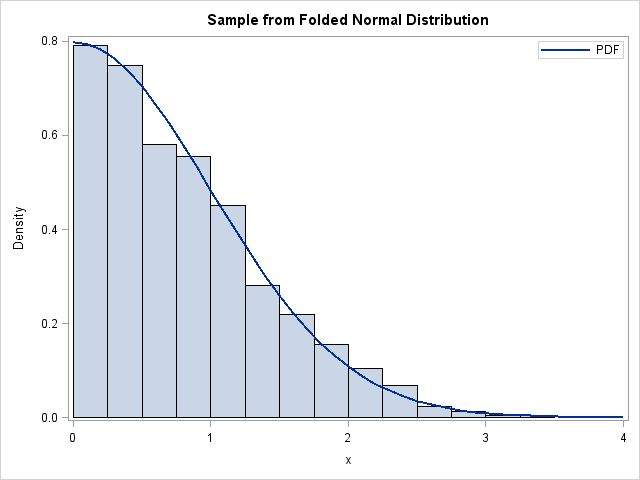 I've previously described how to overlay two or more density curves on a single plot. I've also written about how to use PROC SGPLOT to overlay custom curves on a graph. This article describes how to overlay a density curve on a histogram. For common distributions, you can overlay a density by using SAS procedures. However, this article shows how to use the Graphics Template Language (GTL) to overlay a custom density estimate. An example is shown in the figure to the left. The information in this article is adapted from Chapter 3 of my book Simulating Data with SAS.

The UNIVARIATE procedure supports fitting about a dozen distributions to data, including the beta, exponential, gamma, lognormal, and Weibull distributions. There are several examples in the PROC UNIVARIATE documentation that demonstrate how to fit parametric densities to data.

For more complicated models, other SAS procedures are available. You can use the FMM procedure to fit finite mixtures of distributions. In SAS/ETS software, the SEVERITY procedure can fit many distributional models to data. For nonparametric models, the KDE procedure can fit one- and two-dimensional kernel density estimates.

These procedures enable you to overlay density curves for common distributions. For me, these procedures suffice 99% of the time. However, there are situations where you might want to do the following:

The SGPLOT procedure does not enable you to use a HISTOGRAM statement and a SERIES statement in the same call. However, you can overlay a histogram and a curve by using the GTL.

The following template is a simplified version of a template that I used in my book. You can use it as is, or modify it to include additional features such as grid lines.

The PDF for a folded distribution is easy to compute: simply fold the distribution across zero and add the densities of each tail:

The goal is to construct a histogram of the MyData data set and overlay the curve in the PDFFolded data set. There is a standard technique that you can use to overlay a curve on data: concatenate the two data sets and call an SG procedure on the combined data.

The graph that results is shown at the beginning of this article. Notice that this graph cannot be produced without using the GTL, because the folded normal distribution is not one of the distributions that is supported by PROC UNIVARIATE or PROC SEVERITY.

I try to avoid using the GTL, but it is necessary in this case. Perhaps one day the SGPLOT procedure will enable overlaying a custom curve on a histogram, but until then the GTL provides a way to overlay a custom density estimate on a histogram.