In a previous post, I described how to compute means and standard errors for data that I want to rank. The example data (which are available for download) are mean daily delays for 20 US airlines in 2007.

The previous post carried out steps 1 and 2 of the method for computing confidence intervals for rankings, as suggested in Marshall and Spiegelhalter (1998):

To recap, here is the SAS/IML program so far. The following statements compute the mean delays and standard errors for each airline in 2007. The airlines are then reordered by their mean delays:

You can use the simulation method suggested by Marshall and Spiegelhalter to compute confidence intervals for the rankings. The following statements sample 10,000 times from normal distributions. (I've previously written about how to write an efficient simulation in SAS/IML software.) Each of these samples represents a potential realization of the underlying random variables:

The following statements use the SAS/IML RANK function to compute the rank (1–20) for each simulated set of means. (If you need to conserve memory, you can re-use the s matrix to store the ranks.)

You can print q to see the results in tabular form. I prefer graphical displays, so the following statements create a SAS data set that contains the estimated ranks and the upper and lower confidence limits.

It is now straightforward to use SCATTER statement in PROC SGPLOT to create a scatter plot with confidence intervals (called "error bars" in some disciplines): 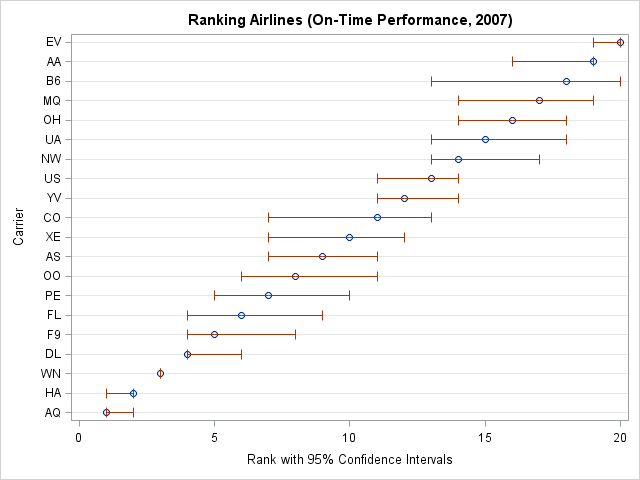 For these data, the ranking of the first three airlines (AQ, HA, WN) seems fairly certain, but there is more uncertainty for the rankings of airlines that are in the middle of the pack. So, for example, if Frontier Airlines (F9) issues a press release about their 2007 on-time performance, it shouldn't claim "We're #5!" Rather, it should state "We're #5 (maybe), but we might be as high as #4 or as low as #8."

In keeping with my New Year's Resolutions, I've learned something new. Next time I want to rank a list, I will pay more attention to uncertainty in the data. Plotting confidence intervals for the rankings is one way to do that.