This is the third and last introductory article about how to bootstrap time series in SAS. In the first article, I presented the simple block bootstrap and discussed why bootstrapping a time series is more complicated than for regression models that assume independent errors. Briefly, when you perform residual resampling on a time series, you need to resample in blocks to simulate the autocorrelation in the original series. In the second article, I introduced the moving-block bootstrap. For both methods, all blocks are the same size, and the block size must evenly divide the length of the series (n).

The "stationary" bootstrap gets its name from Politis and Romano (1992), who developed it. When applied to stationary data, the resampled pseudo-time series is also stationary.

Choosing the length of a block

By definition, this process generates blocks whose lengths are geometrically distributed: L ~ Geom(p).

There are several ways to implement the stationary block bootstrap in SAS. A straightforward method is to generate a starting integer, t, uniformly at random in the range [1, n], where n is the length of the series. Then, choose a length, L ~ Geom(p). If t + L exceeds n, truncate the block. (Some practitioners "wrap" the block to include residuals at the beginning of the series. This alternative method is called the circular block bootstrap.) Continue this process until the total length of the blocks is n. You will usually need to truncate the length of the last block so that the sum of the lengths is exactly n. This process is implemented in the following SAS/IML user-defined functions:

Let's run these functions on some sample data. The first article in this series shows how to fit a model to the Sashelp.Air data and write the predicted and residual values. The following statements use the stationary block bootstrap to generate one bootstrap sample of length n from the residuals. When you add the bootstrapped residuals to the predicted values, you get a "new" time series, which is graphed: 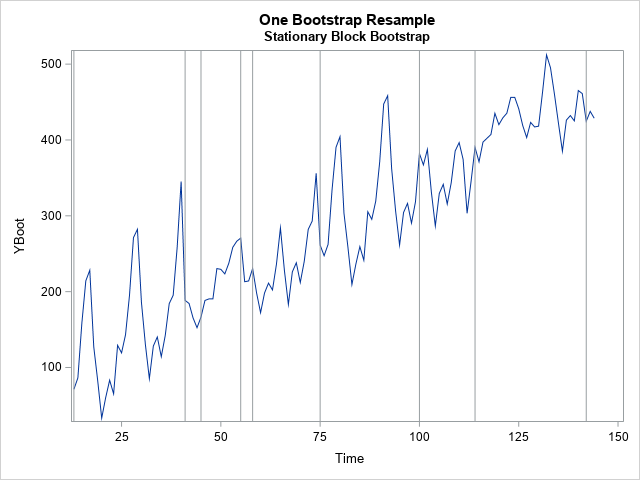 The graph shows a single bootstrap sample. I have added vertical reference lines to show the blocks of residuals. For this random sample, there are nine blocks whose lengths vary between 2 (the last block) and 28. If you choose another random sample, you will get a different set of blocks that have different lengths.

In practice, the bootstrap method requires many bootstrap resamples. You can call the StationaryIdx function repeatedly in a loop to generate B=1000 bootstrap samples, as follows: 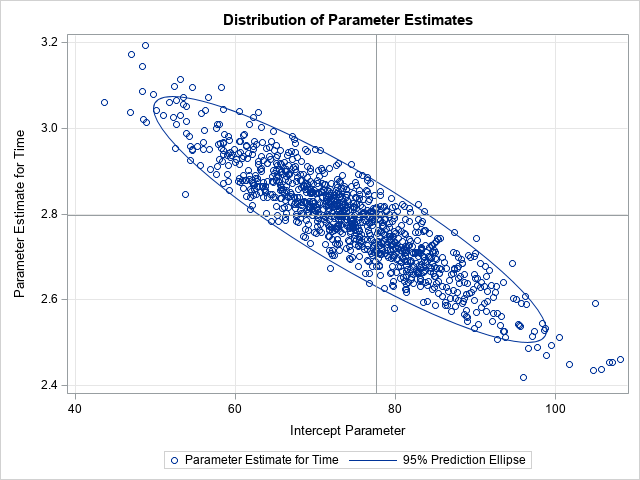 You can download the complete SAS program that performs all computations and creates all graphs in this article.

In researching these blog posts, I read several articles. I recommend Bates (2019) for an introduction and Politis and Romano (1994) for details.