The geometry of multivariate normal data

A canonical example of adding an improbable value is to add an outlier to normal data by creating a data point that is k standard deviations from the mean. (For example, k = 5, 6, or 10.) For multivaraite data, an outlier does not always have extreme values in all coordinates. However, the idea of an outliers as "far from the center" does generalize to higher dimensions. The following technique generates outliers for multivariate normal data:

In short, you use the Cholesky transformation to transform standardized uncorrelated data into scaled correlated data. The remarkable thing is that you can specify the covariance and then directly compute the Cholesky transformation that will result in that covariance. This is a special property of the multivariate normal distribution. For a discussion about how to perform similar computations for other multivariate distributions, see Chapter 9 in Simulating Data with SAS (Wicklin 2013).

Let's illustrate this method by using a two-dimensional example. The following SAS/IML program generates 200 standardized uncorrelated data points. In the standardized coordinate system, the Euclidean distance and the Mahalanobis distance are the same. It is therefore easy to generate an outlier: you can generate any point whose distance to the origin is larger than some cutoff value. The following program generates outliers that are 5 units from the origin: 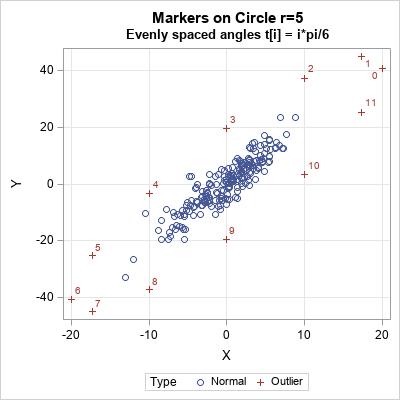 The program simulates standardized uncorrelated data (X ~ MVN(0, I(2))) and then appends 12 points on the circle of radius 5. The Cholesky transformation correlates the data. The correlated data are shown in the scatter plot. The circle of outliers has been transformed into an ellipse of outliers. The original outliers are 5 Euclidean units from the origin; the transformed outliers are 5 units of Mahalanobis distance from the origin, as shown by the following computation: 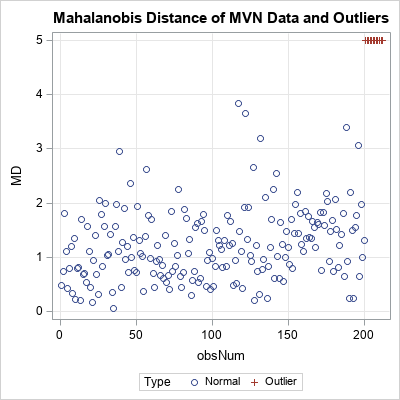 The same technique enables you to add outliers at any distance to the origin. For example, the following modification of the program adds outliers that are 5, 6, and 10 units from the origin. The t parameter determines the angular position of the outlier on the circle: 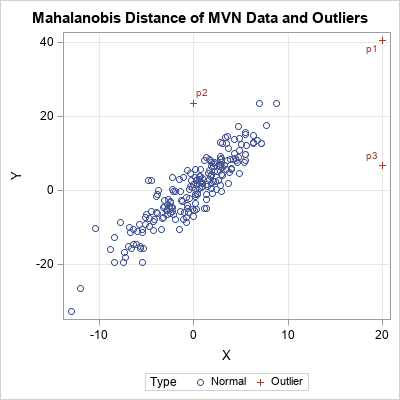 If you use the Euclidean distance, the second and third outliers (p2 and p3) are closer to the center of the data than p1. However, if you draw the probability ellipses for these data, you will see that p1 is more probable than p2 and p3. This is why the Mahalanobis distance is used for measuring how extreme an outlier is. The Mahalanobis distances of p1, p2, and p3 are 5, 6, and 10, respectively.

In two dimensions, you can use the formula (x(t), y(t)) = r*(cos(t), sin(t)) to specify an observation that is r units from the origin. If t is chosen randomly, you can obtain a random point on the circle of radius r. In higher dimensions, it is not easy to parameterize a sphere, which is the surface of an d-dimensional ball. Nevertheless, you can still generate random points on a d-dimensional sphere of radius r by doing the following:

In the SAS/IML language, it would look like this: 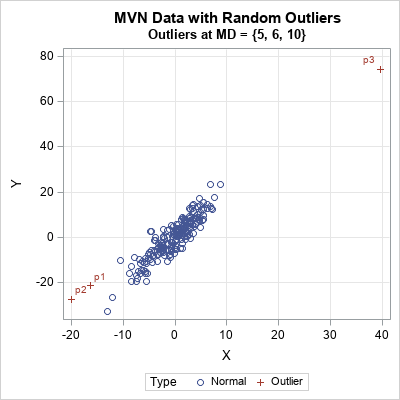 For these particular random outliers, the largest outliers (MD=10) is in the upper right corner. The others are in the lower left corner. If you change the random number seed in the program, the outliers will appear in different locations.

In summary, by understanding the geometry of multivariate normal data and the Cholesky transformation, you can manufacture outliers in specific locations or in random locations. In either case, you can control whether you are adding a "near outlier" or an "extreme outlier" by specifying an arbitrary Mahalanobis distance.

You can download the SAS program that generates the graphs in this article.