Given a covariance matrix, Σ, it can be factored uniquely into a product Σ=UTU, where U is an upper triangular matrix with positive diagonal entries and the superscript denotes matrix transpose. The matrix U is the Cholesky (or "square root") matrix. Some people (including me) prefer to work with lower triangular matrices. If you define L=UT, then Σ=LLT. This is the form of the Cholesky decomposition that is given in Golub and Van Loan (1996, p. 143). Golub and Van Loan provide a proof of the Cholesky decomposition, as well as various ways to compute it.

The Cholesky Transformation: The Simple Case

Let's see how the Cholesky transofrmation works in a very simple situation. Suppose that you want to generate multivariate normal data that are uncorrelated, but have non-unit variance. The covariance matrix for this situation is the diagonal matrix of variances: Σ = diag(σ21,...,σ2p). The square root of Σ is the diagonal matrix D that consists of the standard deviations: Σ = DTD where D = diag(σ1,...,σp).

Geometrically, the D matrix scales each coordinate direction independently of the other directions. This is shown in the following image. The X axis is scaled by a factor of 3, whereas the Y axis is unchanged (scale factor of 1). The transformation D is diag(3,1), which corresponds to a covariance matrix of diag(9,1). If you think of the circles in the top image as being probability contours for the multivariate distribution MVN(0, I), then the bottom shows the corresponding probability ellipses for the distribution MVN(0, D). 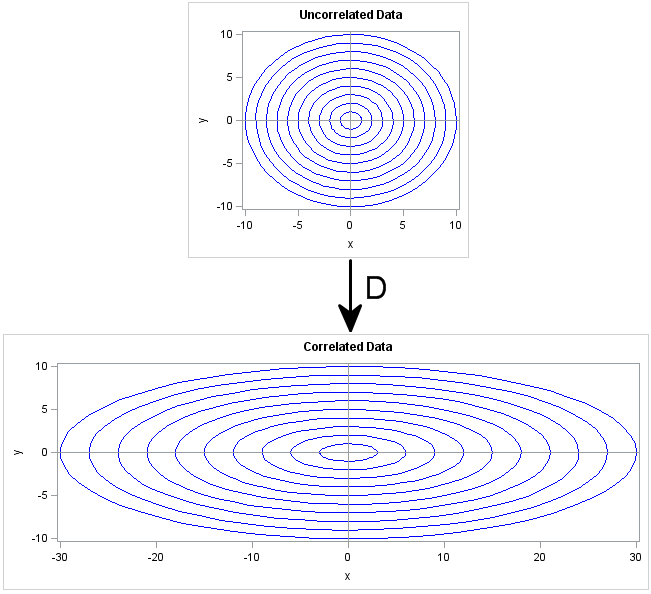 In the general case, a covariance matrix contains off-diagonal elements. The geometry of the Cholesky transformation is similar to the "pure scaling" case shown previously, but the transformation also rotates and shears the top image.

You can use the Cholesky matrix to create correlations among random variables. For example, suppose that X and Y are independent standard normal variables. The matrix U (or its transpose, L=UT) can be used to create new variables Z and W such that the covariance of Z and W equals Σ. The following SAS/IML statements generate X and Y as rows of the matrix xy. That is, each column is a point (x,y). (Usually the variables form the columns, but transposing xy makes the linear algebra easier.)The statements then map each (x,y) point to a new point, (z,w), and compute the sample covariance of the Z and W variables. As promised, the sample covariance is close to Σ, the covariance of the underlying population.

The following graph shows the geometry of the transformation in terms of the data and in terms of probability ellipses. The top graph is a scatter plot of the X and Y variables. Notice that they are uncorrelated and that the probability ellipses are circles. The bottom graph is a scatter plot of the Z and W variables. Notice that they are correlated and the probability contours are ellipses that are tilted with respect to the coordinate axes. The bottom graph is the transformation under L of points and circles in the top graph. 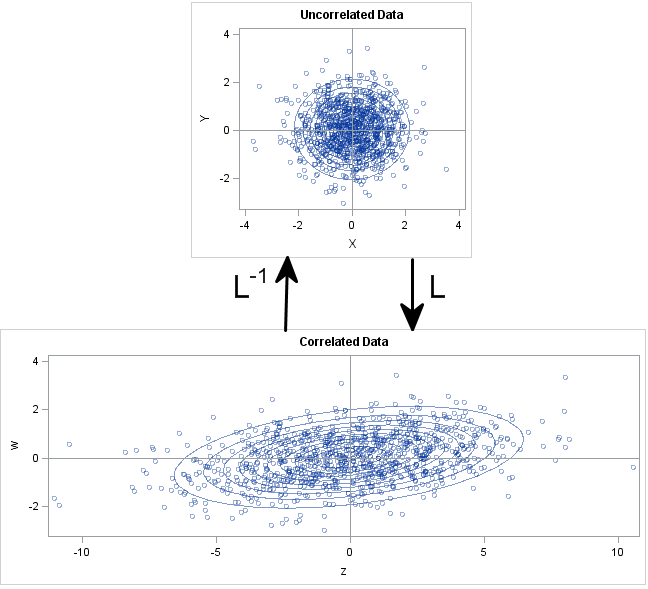 Suppose that you generate multivariate normal data from MVN(0,Σ). You can "uncorrelate" the data by transforming the data according to L-1. In SAS/IML software, you might be tempted to use the INV function to compute an explicit matrix inverse, but as I have written, an alternative is to use the SOLVE function, which is more efficient than computing an explicit inverse matrix. However, since L is a lower triangular matrix, there is an even more efficient way to solve the linear system: use the TRISOLV function, as shown in the following statements:

Success! The covariance matrix is essentially the identity matrix. The inverse Cholesky transformation "uncorrelates" the variables.

In summary, you can use the Cholesky factor of a covariance matrix in several ways: