You can use the Cholesky decomposition of a covariance matrix to simulate data from a correlated multivariate normal distribution. This method is encapsulated in the RANDNORMAL function in SAS/IML software, but you can also perform the computations manually by calling the ROOT function to get the Cholesky root and then use matrix multiplication to correlate multivariate norm (MVN) data, as follows: 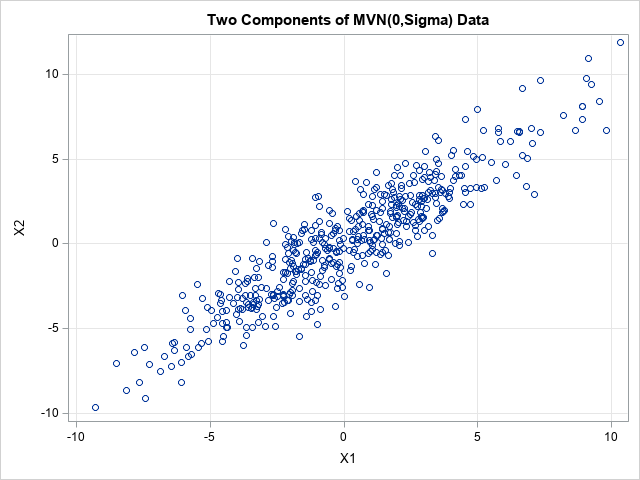 The simulation creates d=12 correlated variables and 500 observations. The first two variables are plotted against each other so that you can see that they are correlated. The other pairs of variables are also correlated according to the entries in the Σ covariance matrix.

In the comments to one of my previous articles, a SAS programmer asked whether it is possible to generate MVN data even if the covariance matrix is so large that it cannot be factored by the ROOT function. For example, suppose you want to generate d=20,000 MVN variables. A d x d covariance matrix of that size requires 3 GB of RAM, and on some operating system you cannot form the Cholesky root of a matrix that large. However, I have developed an algorithm that enables you to deal with the covariance matrix (Σ) as a block matrix.

To introduce the algorithm, represent the Σ matrix as a 2 x 2 block matrix. (See the last section for a more general representation.) For a 2 x 2 block algorithm, you only need to form the Cholesky roots of matrices of size (d/2), which are 10000 x 10000 matrices for this example. Matrices of that size require only 0.75 GB and can be quickly factored. Of course, there is no such thing as a free lunch: The new algorithm is more complicated and requires additional computations, albeit on smaller matrices.

Let's look at how to simulate MVN data by treating Σ as a block matrix of size d/2. For ease of exposition, assume d is even and each block is of size d/2. However, the algorithm easily handles the case where d is odd. When d is odd, choose the upper blocks to have floor(d/2) rows and choose the lower clocks to have ceil(d/2) rows. The SAS code (below) handles the general case. (In fact, the algorithm doesn't care about the block size. For any p in (0, 1), one block can be size pd and the other size (1-p)d.

There is a theorem that says that if Σ is symmetric positive definite (SPD), then so is every principal submatrix, so A is SPD. Thus, we can use the Cholesky decomposition and write \(A = G^\prime_A G_A\) for an upper triangular matrix, \(G_A\). By reordering the variables, C is SPD as well. You can also prove (see Prop 2.2 in these notes by Jean Gallier) that Σ and A are PD if and only if S is PD. Thus you can factor \(S = G^\prime_S G_S\) for an upper triangular Cholesky matrix \(G_S\). (Thanks to my colleague, Clay, for finding this result for me.)

The previous equation indicates that you can generate correlated MVN(0, Σ) data if you know the Cholesky decomposition of the upper-left block of Σ (which is GA) and the Cholesky decomposition of the Schur complement (which is GS). Each of the matrices in these equations is of size d/2, which means that the computations are performed on matrices that are half the size of Σ. However, notice that generating the x2 components requires some extra work: the Schur complement involves the inverse of A and the formula for x2 also involves the inverse of GA. These issues are not insurmountable, but it means that the block algorithm is more complicated than the original algorithm, which merely multiplies z by the Cholesky root of Σ.

A SAS program for block simulation of MVN data

The first step is to represent Σ and z in block form.

It is easy to generate x1, which contains the first d/2 components of the MVN(0, Σ) simulated data. You simply use the Cholesky decomposition of A, which is the upper-left block of Σ:

Analysis of the block algorithm

Now that the algorithm runs on a small example, you can increase the dimensions of the matrices. For example, try rerunning the algorithm with the following parameters:

When I run this larger program on my PC, it takes about 2.3 seconds to simulate the MVN data by using the full Cholesky decomposition. It takes about 17 seconds to simulate the data by using the block method. Most of the time for the block method is spent on the computation v = B`*inv(G_A)*z1, which takes about 15 seconds. So if you want to improve the performance, you should focus on improving that computation.

You can improve the performance of the block algorithm in several ways:

I tried several techniques, but I could not make the block algorithm competitive with the performance of the original Cholesky algorithm. The issue is that the block algorithm computes two Cholesky decompositions, solves some linear equations, and performs matrix multiplication. Even though each computation is on a matrix that is half the size of the original matrix, the additional computations result in a longer runtime.

The algorithm generalizes to other block sizes. I will outline the case for a 3 x 3 block matrix. The general case of k x k blocks follows by induction.

The figure to the right shows the Σ covariance matrix as a 3 x 3 block matrix. By using 2 x 2 block algorithm, you can obtain multivariate normal vectors x1 and x2, which correspond to the covariances in the four blocks in the upper-left corner of the matrix. You can then view the upper four blocks as a single (larger) block, thus obtaining a 2 x 2 block matrix where the upper-left block has size 2d/3 and the lower-right block (Σ33) has size d/3.

I have not implemented the details because it is not clear to me whether three or more blocks provides a practical advantage. Even if I work out the details for k=3, the algebra for k > 3 blocks seems to be daunting.

It is well known that you can use the Cholesky decomposition of a covariance matrix to simulate data from a correlated multivariate normal distribution. This article shows how to break up the task by using a block Cholesky method. The method is implemented for k=2 blocks. The block method requires more matrix operations, but each operation is performed on a smaller matrix. Although the block method takes longer to run, it can be used to generate a large number of variables by generating k variables at a time, where k is small enough that the k x k matrices can be easily handled.

The block method generalizes to k > 2 blocks, but it is not clear whether more blocks provide any practical benefits.