The SAS program that creates these plots is shown in the previous article. Notice that the markers at Y=0 and Y=1 are displayed by using a scatter plot. Although the sample size is only 500 observations, the scatter plot for the binary response suffers from overplotting. For larger data sets, the scatter plot might appear as two solid lines of markers, which does not provide any insight into the distribution of the horizontal variable. You can plot partially transparent markers, but that does not help the situation much. A better visualization is to eliminate the scatter plot and instead use a binary fringe plot (also called a butterfly fringe plot) to indicate the horizontal positions for each observed response. 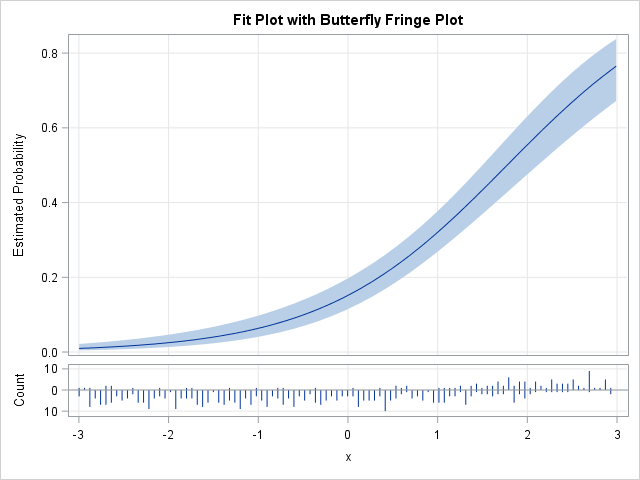 A predicted probability plot with a binary fringe plot is shown to the right. Rather than use the same graph area to display the predicted probabilities and the observed responses, a small "butterfly fringe plot" is shown in a panel below the predicted probabilities. The lower panel indicates the counts of the responses by using lines of various lengths. Lines that point down indicate the number of counts for Y=0 whereas lines that point up indicate the counts for Y=1. For these data, the X values less than 1 have many downward-pointing lines whereas the X values greater than 1 have many upward-pointing lines.

To create this plot in SAS, you can do the following:

You can download the SAS program that defines the GTL template and creates the predicted probability plot.

A calibration plot with binary fringe 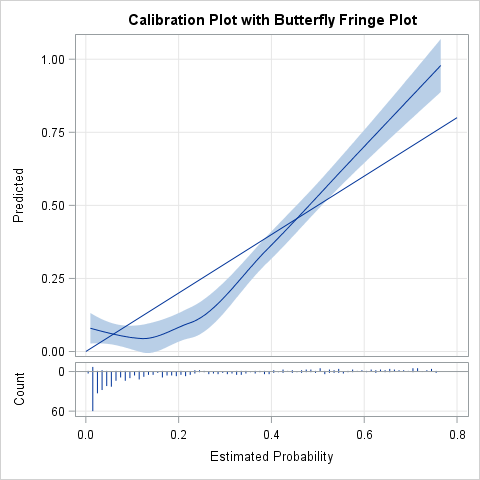 By using similar steps, you can create a calibration plot with a binary fringe plot as shown to the right. The main panel is used for the calibration plot and a small binary fringe plot is shown in a panel below it. The lower panel shows the counts of the responses at various positions. Note that the horizontal variable is the predicted probability from the model whereas the vertical variable is the empirical probability as estimated by the LOESS procedure. For these simulated data, the fringe plot shows that most of the predicted probabilities are less than 0.2 and these small values mostly correspond to Y=0. The observations for Y=1 mostly have predicted probabilities that are greater than 0.5. The fringe plot reveals that about 77% of the observed responses are Y=0, a fact that was not apparent in the original plots that used a scatter plot to visualize the response variable.

To create this plot in SAS, you can do the following:

You can download the SAS program that defines the GTL template and creates the calibration plot.

For both plots, the frequencies of the responses are shown by using "needles," but you can make a small change to the GTL to make the fringe plot use thin bars so that it looks more like a butterfly plot of two histograms. See the program for details.

What do you think of this plot? Do you like the way that the binary fringe plot visualizes the response variable, or do you prefer the classic plot that uses a scatter plot to show the positions of Y=0 and Y=1? Leave a comment.