The decile calibration plot is a graphical analog of the Hosmer-Lemeshow goodness-of-fit test for logistic regression models. The subjects are divided into 10 groups by using the deciles of the predicted probability of the fitted logistic model. Within each group, you compute the mean predicted probability and the mean of the empirical binary response. A calibration plot is a scatter plot of these 10 ordered pairs, although most calibration plots also include the 95% confidence interval for the proportion of the binary responses within each group. Many calibration plots connect the 10 ordered pairs with piecewise line segments, others use a loess curve or a least squares line to smooth the points.

The previous article simulated 500 observations from a logistic regression model logit(p) = b0 + b1*x + b2*x2 where x ~ U(-3, 3). The following call to PROC LOGISTIC fits a linear model to these simulated data. That is, the model is intentionally misspecified. A call to PROC RANK creates a new variable (Decile) that identifies the deciles of the predicted probabilities for the model. This variable is used to compute the means of the predicted probabilities and the empirical proportions (and 95% confidence intervals) for each decile: 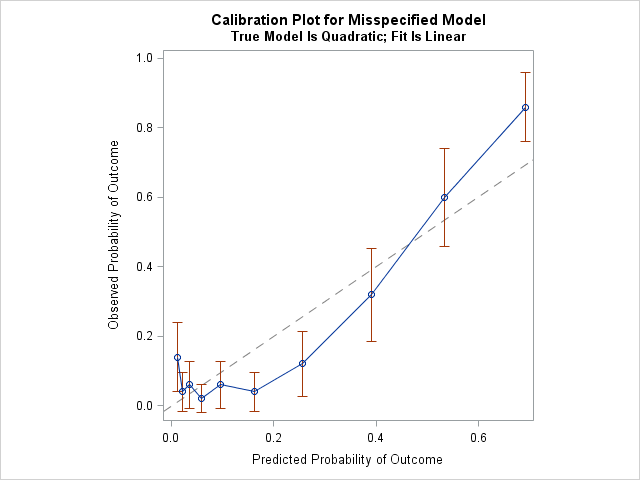 The decile calibration plot for a correctly specified model

You can fit a quadratic model to the data to see how the calibration plot changes for a correctly specified model. The results are shown below. In this graph, all markers are close to the diagonal line, which indicates a very close agreement between the predicted and observed probabilities of the event. 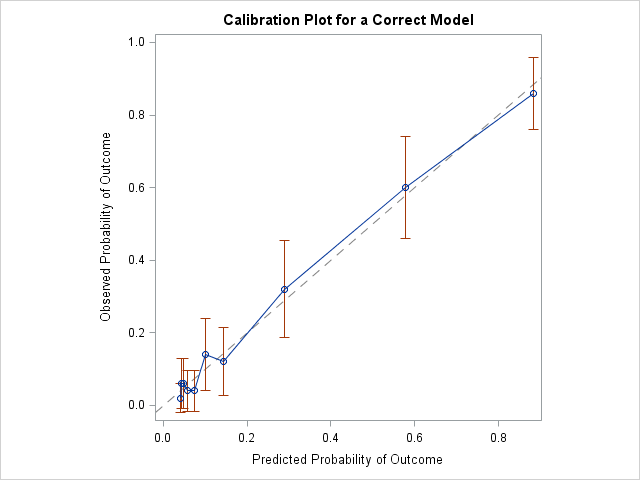 Should you use the decile calibration curve?

You can download the SAS code used in this article.