Why would you anyone need to run 1,000 regressions?

Why anyone wants to solve thousands of linear regression problems? I can think of a few reasons:

In a previous article, I showed how to simulate data that satisfies a regression model. I created a data set that contains explanatory variables X1-X1000 and a single response variable, Y. You can download the SAS program that computes the data and performs the regression.

The following SAS/IML program reads the simulated data into a large matrix, M. For each regression, it forms the three-column matrix A from the intercept column, the k_th explanatory variable, and the variable Y. It then forms the sum of squares and cross products (SSCP) matrix (A`*A) and uses the SWEEP function to solve the least squares regression problem. The two parameter estimates (intercept and slope) for each explanatory variable are saved in a 2 x 1000 array. A few parameter estimates are displayed.

You could perform a similar loop for models that contain multiple variables, such as all two-variable main-effect models of the form Y = b0 + b1*X_k + b2*X_j, where k ≠ j. You can use the ALLCOMB function in SAS/IML to choose the combinations of columns to sweep.

You can also use the SWEEP operator to perform the regression of many responses onto a single explanatory variable. This case is easy in PROC REG because the procedure supports multiple response variables. The analysis is also easy if you use the SWEEP function in SAS/IML. It only requires a single function call!

The following DATA step simulates 1,000 response variables according to the model Y_i = b0 + b1*X + ε, where b0 = 39.07, b1 = 0.902, and ε ~ N(0, 5.71) is a normally distributed random error term. These values are the parameter estimates for the regression of SepalLength onto SepalWidth for the virginica species of iris flowers in the Sashelp.Iris data set. For more about simulating regression models, see Chapter 11 of Wicklin (2013).

After generating the data, you can compute all 1,000 parameter estimates by using a single call to the SWEEP function in SAS/IML. The following program forms a matrix M for which the first column is an intercept term, the second column is the X variable, and the next 1,000 columns are the simulated responses. Sweeping the first two rows of the M`*M matrix computes the 1,000 parameter estimates, which are then graphed in a scatter plot. 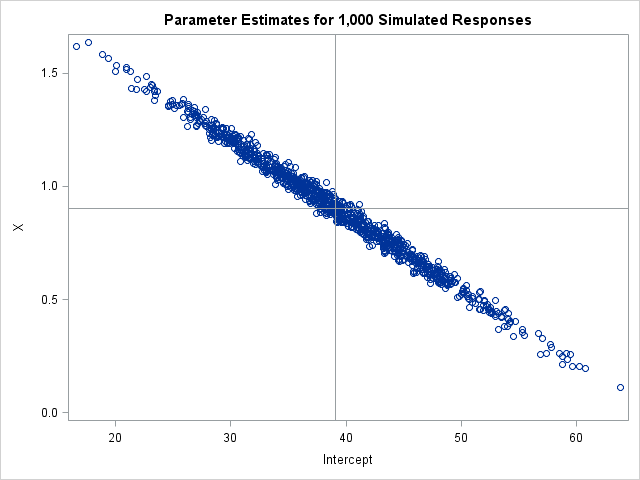 In summary, you can use the SWEEP operator (implemented in the SWEEP function in SAS/IML) to efficiently compute thousands of regression estimates for wide data. This article demonstrates how to compute models that have many explanatory variables (Y = b0 + b1* X_i) and models that have many response variables (Y_i = b0 + b1 * X). Are there drawbacks to this approach? Sure. You don't automatically get the dozens of ancillary regression statistics like R squared, adjusted R squared, p-values, and so forth. Also, PROC REG automatically handles missing values, whereas in SAS/IML you must first extract the complete cases before you try to form the SSCP matrix. Nevertheless, this computation can be useful for simulation studies in which the data are simulated and analyzed within SAS/IML.