“La Quinta” is Spanish for “next to Denny’s.”
-- Mitch Hedberg, comedian


Mitch Hedberg's joke resonates with travelers who drive on the US interstate system because many highway exits feature both a La Quinta Inn™ and a Denny's® restaurant within a short distance of each other. But does a statistical data analysis support this anecdotal evidence?

In 2014 John Reiser wrote a blog post that uses the Python language to scrape the web for the locations of La Quinta Inns and Denny's restaurants. He then analyzed the data to show that, yes, in general, a guest at a La Quinta Inn does not have far to travel if he wants to eat at a Denny's restaurant. This work inspired Colin Rundel and Mine Cetckaya-Rundel to assign this analysis as a project for their students at Duke University and to write an article in CHANCE magazine (29(2), 2016) about the assignment.

Rundel and Cetckaya-Rundel posted CSV files on the CHANCE web site that contain the longitude, latitude, and addresses of 851 La Quinta Inns and 1,634 Denny's restaurants in the contiguous US (as of Dec 2015). This article follows their presentation and shows how to analyze the La Quinta-Denny's spatial data in SAS. The analysis is a straightforward extension of the nearest-neighbor techniques shown in article "Distances between observations in two groups." You can download the SAS program that imports the data and creates all the graphs and tables in this article.

Visualizing the locations of La Quinta Inns and Denny's restaurants 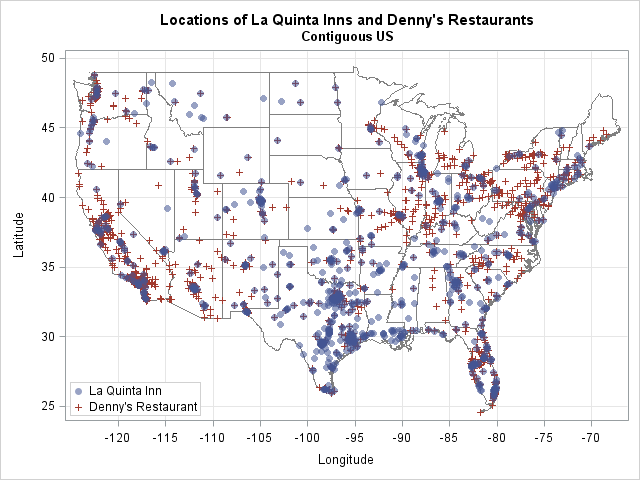 You can use PROC HTTP in SAS to read CSV files directly from a URL. After importing the locations of La Quinta Inns and Denny's restaurants from the CHANCE web site, you can use PROC SGPLOT to plot the (unprojected) locations as longitudes and latitudes. To help visualize the locations, the adjacent graph overlays the data on an outline of the lower-48 states in the US. (Click the graph to enlarge.)

In the graph, the La Quinta Inns are represented by blue circles and Denny's by a red cross. In the enlarged version you can see that many circles enclose a red cross, which indicates that the inn and restaurant are very close. On the other hand, there are a few La Quinta locations that seem to be far away from any Denny's. Montana, North Dakota, Louisiana, Kansas, Nevada, and southwest Texas are some geographic regions in which a blue circle is not close to a red cross.

The distance to the nearest Denny's for each La Quinta Inn

I've previously written about how to compute the distance to the nearest neighbor between observations that are in different groups. For these data, the La Quinta Inns form one group and the Denny's restaurants form a second group. Because the coordinates for these data are longitude and latitude, you need to use the GEODIST function in Base SAS to compute the distance ( in kilometers, as the crow flies) between each hotel and the nearest Denny's.

For each of the 851 hotels, you can find the distance to the nearest Denny's. The following table summarizes the distribution of distances, in kilometers:

The table shows that the closest Denny 's is a mere 11 meters from the adjacent La Quinta Inn! For 25% of the inns, the nearest Denny's is within 1.3 km, which is a short walk. Fifty percent of the inns are within 5 km (an easy drive) of a Denny's, and 75% are within 17 km. It seems that the data supports a modified version of Hedberg's joke: “La Quinta” is Spanish for “often close to a Denny’s.”

The following histogram shows the distribution of the 851 distances from each La Quinta Inn to the nearest Denny's. The histogram shows that about 65% of the inns are within 10 km and about 77% are within 20 km. As long as the husband and wife stay at these inns, they will both be happy, well-rested, and well-fed! 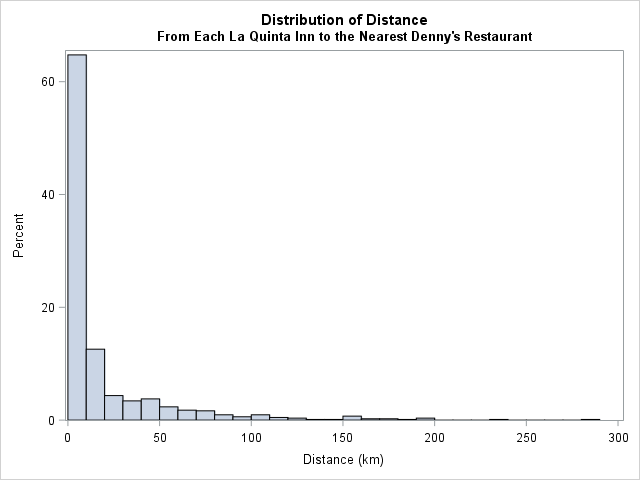 La Quinta Inns that are far from a Denny's 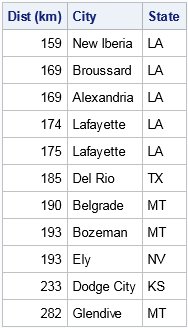 Clearly the couple can happily sleep at a La Quinta Inn and eat at a Denny's provided that they avoid the few La Quinta Inns that are not located near a Denny's. The scatter plot and map near the top of this article gives some indications about where these inns are located, but we can identify these inns more precisely. For the sake of the couple's marital bliss, let's enumerate the inns that are farthest from a Denny's.

If possible, the couple should avoid these inns, but what if their travels bring them through these cities? In that case, they need to know that distance and location to the nearest Denny's. The next graph might be helpful.

The following graph shows all the La Quinta Inns. The inns shown in red are those for which the distance to the nearest Denny's is more than 80 km away. For each of these inns, an arrow is drawn from the La Quinta Inn to the location of the nearest Denny's. (I explained this nearest-neighbor plot in a previous article.) This helps the couple know what direction they need to drive in order to reach breakfast—or perhaps lunch! For some La Quinta locations (MT, SC, TN) the couple will need to drive into an adjacent state. 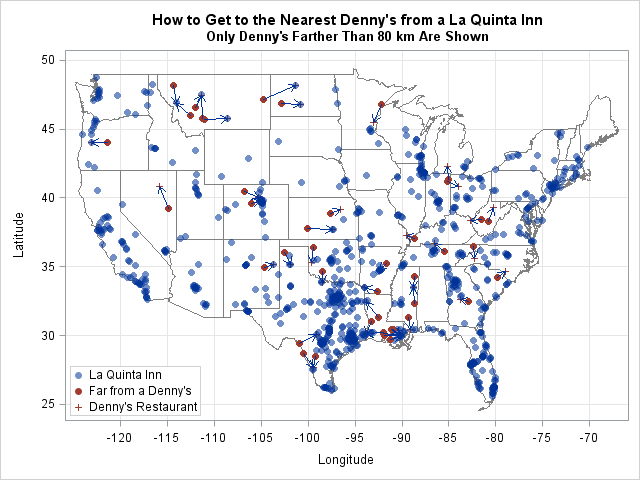 Mitch Hedberg's joke is funny because it has an element of truth. For most La Quinta Inns, the nearest Denny's restaurant is a short walk or drive away. By using nearest-neighbor computations and the GEODIST function in SAS, you can compute the distances from each inn to the nearest Denny's. You can graph the set of distances and compute statistics such as quantiles. You can visualize the co-locations of the inns and restaurants, and even direct travelers to the nearest Denny's. I agree with Rundel and Cetckaya-Rundel that this exercise provides a fun activity in data analysis for students.

For professional SAS programmers, the exercise demonstrates how to conduct a particular kind of co-location analysis. Instead of Denny's restaurants, the professional analyst might be interested in the distance to the nearest hospital, distribution center, or cell-phone tower. SAS statistical graphics and SAS/IML, provides the tools for analyzing the distance between groups of spatial data.

If you want to examine or extend my analysis of these data, you can download the SAS program.