Last week I showed how to find the nearest neighbors for a set of d-dimensional points. A SAS user wrote to ask whether something similar could be done when you have two distinct groups of points and you want to find the elements in the second group that are closest to each element in the first group.

This article solves the problem in a straightforward way: compute all the pairwise distances between the points in each group. Distances within groups are not needed, so they are not computed.

Compute the pairwise distances between points

I previously showed how to compute the pairwise distance between points in different sets. Let S be a set of n d-dimensional points and let R be another set of m points. The PairwiseDist function in SAS/IML (shown below) returns an n x m matrix, D, of distances such that D[i,j] is the distance from the i_th point in S to the j_th point in R. The PairwiseNearestNbr function is the same algorithm that was used to find nearest neighbors, so I will not re-explain how the function works. Suffice it to say that it returns two matrices: a matrix of row numbers and a matrix or distances. If you have access to In SAS/IML 14.3 (released as part of SAS 9.4M5), the DISTANCE function in PROC IML can compute pairwise distances, as shown in the previous article.

An example of finding nearest points

To illustrate how you can use these functions, consider two sets S and R. The set R is the set of resources locations (stores, hospitals, towers,...). For this example, R contains four points that are the vertices of a square of side length 2 centered at the origin. For each point in S, the following SAS/IML statements compute the closest vertex in R and the second-closest-vertex in R:

In a similar way, you can generate random points in the square and color each point in a scatter plot according to the nearest point in the reference set. The ODS GRAPHICS statement with ATTRPRIORITY=NONE forces the ODS style to cycle though colors and symbols. 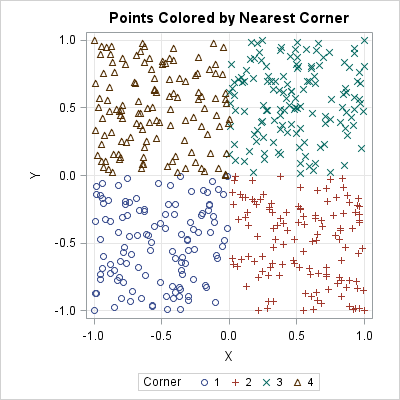 The scatter plot shows what you already knew: points in the first quadrant (green Xs) are closest to the vertex at (1,1). Points in the second quadrant (brown triangles) are closest to the vertex at (-1, 1), and so forth. Any points that are equidistant from two or more vertices (such as the origin) are assigned one of the colors arbitrarily. The points were sorted (not shown) so that the order in the legend agrees with the order of the points in R. 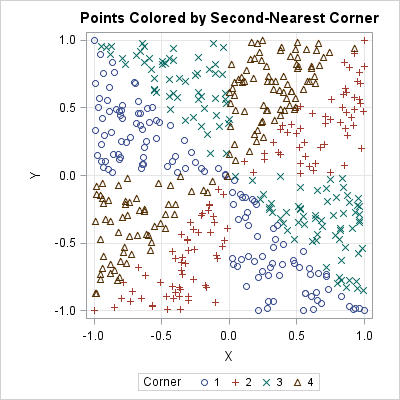