Finding nearest neighbors is an important step in many statistical computations such as local regression, clustering, and the analysis of spatial point patterns. Several SAS procedures find nearest neighbors as part of an analysis, including PROC LOESS, PROC CLUSTER, PROC MODECLUS, and PROC SPP. This article shows how to find nearest neighbors for every observation directly in SAS/IML, which is useful if you are implementing certain algorithms in that language.

Compute the distance between observations

I have previously shown how to compute the distance between observations in SAS by using PROC DISTANCE or the DISTANCE function in SAS/IML. The following statements read the data into a SAS/IML matrix and computes the pairwise distances between all observations:

The D matrix is a symmetric 100 x 100 matrix. The value D[i,j] is the Euclidean distance between the ith and jth rows of X. An easy way to look for the nearest neighbor of observation i is to search the ith row for the column that contains smallest distance. Because the diagonal elements of D are all zero, a useful trick is to change the diagonal elements to be missing values. Then the smallest value in each row of D corresponds to the nearest neighbor.

You can use the following statements assigns missing values to the diagonal elements of the D matrix. You can then use the SAS/IML subscript reduction operators to find the minimum distance in each row: 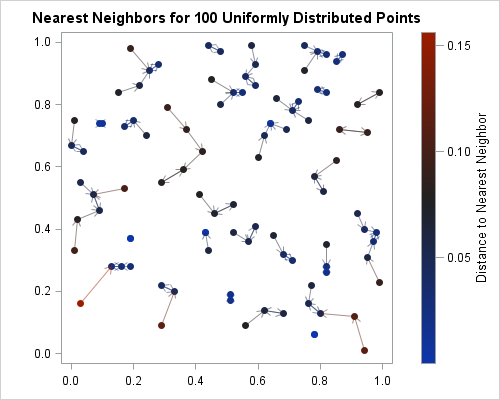 To get the coordinates of the nearest neighbor, you can create a variable that contains the observation numbers and then use an ID statement to include that ID variable in the PROC MODECLUS output. You can then look up the coordinates. I omit the details.

Why stop at one? A SAS/IML module for k nearest neighbors

You can use the ideas in the earlier SAS/IML program to write a program that returns the indices (observation numbers) of the k closest neighbors for k ≥ 1. The trick is to replace the smallest distance in each row with a missing value and then repeat the process of finding the smallest value (and column) in each row. The following SAS/IML module implements this computation: 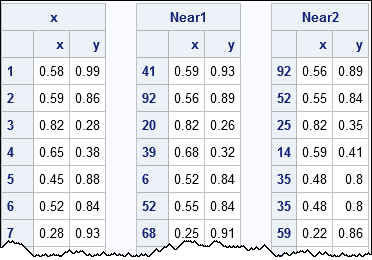 In summary, this article defines a short module in the SAS/IML language that you can use to compute the k nearest neighbors for a set of N numerical observations. Notice that the computation builds an N x N distance matrix in RAM, so this matrix might consume a lot of memory for large data sets. For example, the distance matrix for a data set with 16,000 observations requires about 1.91 GB of memory. For larger data sets, you might prefer to use PROC DISTANCE or PROC MODECLUS.