I have previously shown how to overlay basic plots on box plots when all plots share a common discrete X axis. It is interesting to note that box plots can also be overlaid on a continuous (interval) axis. You often need to bin the data before you create the plot.

A typical situation when you plot a time series. You might want to overlay box plots to display a summary of the response distribution within certain time intervals. For example, last week I visualized World Bank data for the average life expectancy in more than 200 countries during the years 1960–2014. Suppose that for each decade you want to draw a box plot that summarizes the response variable for all countries. You can use the DATA step (or create a data view) to create the Decade variable, as follows:

You can use the following call to PROC SGPLOT to overlay the box plot and the scatter plot of the data: 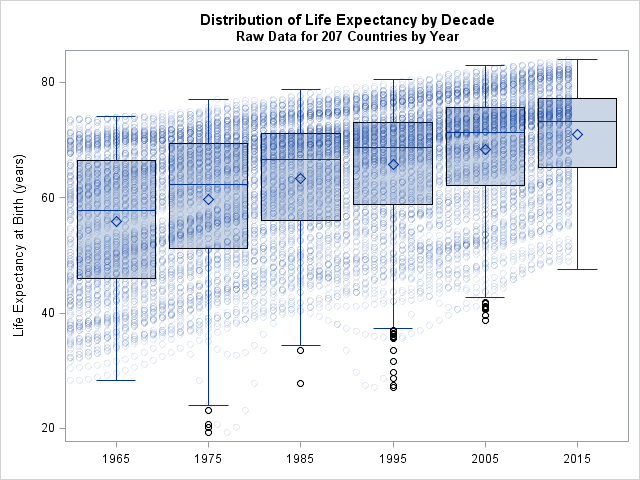 There are a couple of tricks that make this overlay work: 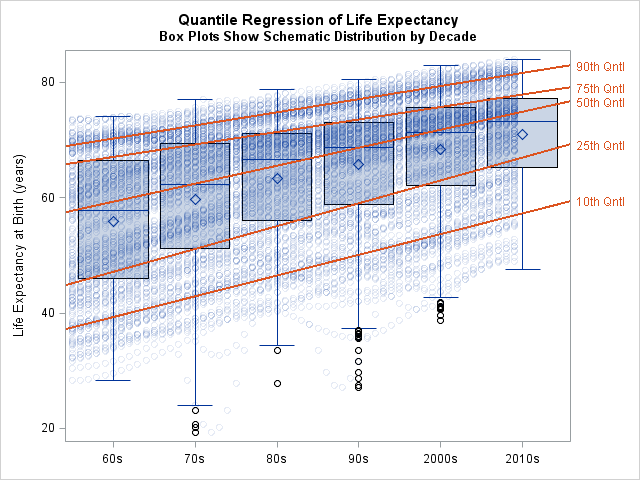 For brevity, I will not discuss how to use PROC QUANTREG to perform quantile regression on these data. However, you can download the program that performs the analysis and creates the graph.

I think that this graph provides an excellent visualization of trends in life expectancy around the world, especially if combined with spaghetti plots or lasagna plots. The countries at the top of the plot have good sanitation, health care, and nutrition. Consequently, their life expectancy increases at a slower rate than countries that have poorer sanitation and nutrition. Small improvements in the poorer countries can make a big difference in the life expectancy of their population.