What is a spaghetti plot? Spaghetti plots are line plots that involve many overlapping lines. Like spaghetti on your plate, they can be hard to unravel, yet for many analysts they are a delicious staple of data visualization. This article presents the good, the bad, and the messy about spaghetti plots and shows how to create basic and advanced spaghetti plots in SAS.

The data set in this article contains World Bank data about the average life expectancy (at birth) for more than 200 countries. The data are for the years 1960–2014. For convenience, I have attached two CSV files, one that contains the life expectancy data and another that contains country information. You can also download the SAS file that creates all the graphs in this article.

A line plot displays a continuous response variable at multiple time points. The response variable might be the price of a stock, the temperature in a city, or the blood pressure of a patient. When there are only a handful of stocks, cities, or patients, you can display multiple lines on the same plot and use labels, colors, or patterns to distinguish the individual units. For example, the following call to PROC SGPLOT creates a line plot of the life expectancy at birth for 10 countries, plotted for the years 1960–2014: 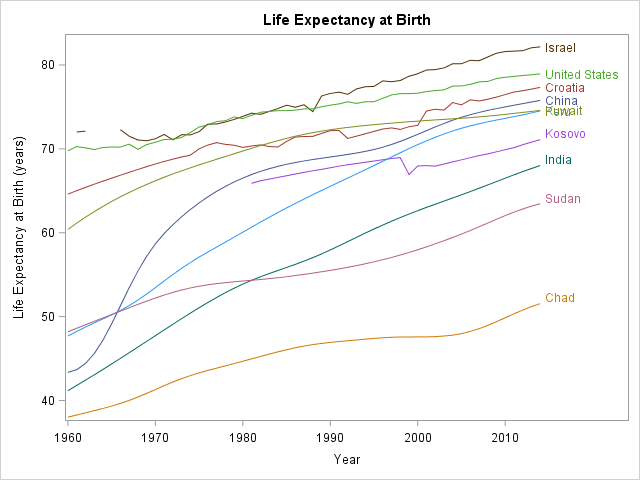 The line plot enables you to easily track the rise and fall of life expectancy over time for each of these 10 countries. The labels for Kuwait and Peru overlap, but otherwise the line plot is easy to read and interpret. You can see the general trend, which is increasing life expectancy for all countries. You can see that richer nations tend to have higher life expectancy than poorer nations. You can also see that Israel is missing several data points in the early 1960s, and that Kosovo is missing data prior to 1981.

The fact that the labels for Peru and Kuwait overlap is sign of that the line plot is starting to transition to a spaghetti plot. As you increase the number of curves in a line plot, more labels will overlap and it becomes harder to distinguish colors and to trace a country's curve from beginning to end. By the time you plot 40 or 50 countries, the time series plot has become a tangled mess that earns the moniker "spaghetti plot."

Serving up a spaghetti plot in SAS

When there are many individual countries (or stocks or patients), the line plot no longer reveals the behavior of each individual unit, but still can reveal trends. If the units can be classified into a small number of categories, colors can be used to visualize whether trends differ between groups. For example, patients might be grouped into cohorts, such as males versus females or control versus experimental groups.

For the life expectancy data, an Income variable records the relative wealth of each country. The following call to PROC SGPLOT creates a spaghetti plot that contains lines for 207 countries. 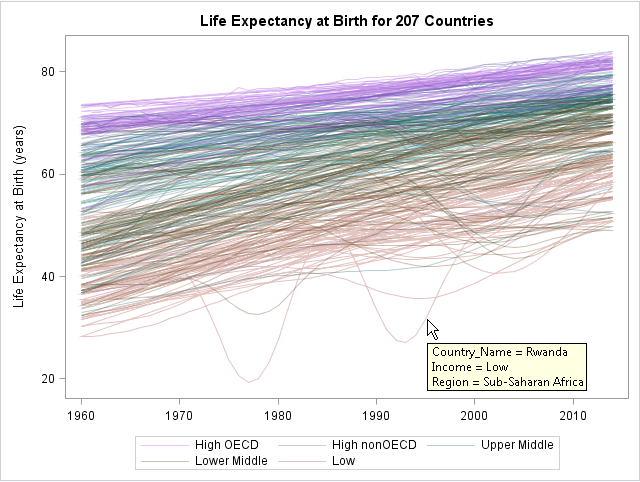 The 207 countries are classified into five groups according to economic factors. Thirty-two nations are wealthy and belong to the Organization for Economic Co-operation and Development (OECD). Forty-two wealthy countries are not OECD members. Fifty-one countries are upper-middle income, 51 are lower-middle income, and 31 are low income. Those categories are used to assign colors to the curves. The GROUPLC= option (available in SAS 9.4M2) is used to color the lines by the five levels of the Income variable.

Transparency is used to reduce overplotting. The TIP= option is used to add tooltips that display information about a country when you hover the mouse pointer over the HTML version of the graph in SAS. Notice also that BREAK option is used to break a line if there is a missing value; otherwise the line segments will connect across missing values.

Although the spaghetti plot contains about 207*54 ≈ 11,000 line segments, you can still deduce certain trends. You can see that the highest life expectancy belongs to OECD nations whereas the lowest belongs to low-income nations. You can see that the average trend is increasing, and that the slope looks greater for the low-income nations. You can see that some curves had negative slopes in the 1980s and 1990s, and that several had precarious dips. By using the tool tips, you can identify Cambodia (1970s) and Rwanda (1990s) as two countries whose life expectancy dipped to alarmingly low levels.

In spite of revealing general trends, it is hard to identify individual countries. The problem is that there are too many overlapping curves. This is a weakness of spaghetti plots: they do not reveal the identity of individuals, except for extreme outliers. If you see an interesting feature of some curve in the middle of the plot, you will have a hard time figuring out which country it is.

One possible alternative is draw the curves for each category in a separate panel rather than overlaying the categories. This reduces the number of curves in any one plot. For the World Bank data, you can use the BY statement in PROC SGPLOT to create full-sized plots of each Income level, or you can use the SGPANEL procedure to create five cells, each with 30 to 50 curves. Again, you can use transparency and tool tips to help discern individual "noodles" among the five spaghetti plots. If the data has additional categories, you can color the line segments in each panel. The following statement create a panel of spaghetti plots where each plot is now colored by a categorical variable (Region) that encodes the country's geographic region. 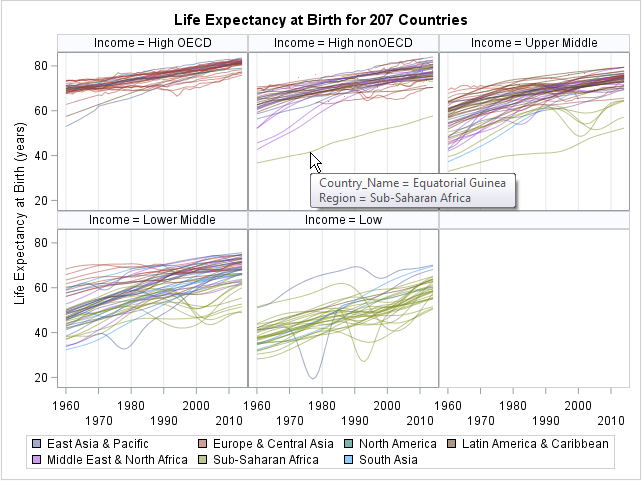 By using the tool tips, you can discover the names of countries that experienced drops in life expectancy due to conflict or environmental disasters. You can display additional variables in the tool tips.

In summary, the spaghetti plot shows major trends over time. If you color by a categorical variable, you can visually compare cohorts. However, the spaghetti plot has some problems. When the number of curves becomes large (typically more than 20 or 30), it becomes difficult to distinguish individual curves. Although using semi-transparent lines helps to reduce overplotting, the plot becomes virtually unreadable when you have 200 or more curves.

There are some modifications that you use to handle overplotting. This article shows a paneling approach, in which cohorts are plotted in separate panels.

Another option is to increase the interactivity of the plot. The Flowing Data website has a nice interactive version of these data. In SAS you could use interactive software such as JMP or SAS/IML Studio to create a similar interactive plot for exploratory data analysis.

Some visualization experts choose a different visualization for multiple time series. Instead of plotting a response versus time, you can show changes in time by using an animation. For example, Hans Rosling famously used an animated bubble plot to show the relationship between life expectancy and average income over time. Sanjay Matange showed how to use PROC SGPLOT to create Rosling's animated bubble plot in SAS.

For an alternative visualization of this time series data, you might consider lasagna plots.