Box plots summarize the distribution of a continuous variable. You can display multiple box plots in a single graph by specifying a categorical variable. The resulting graph shows the distribution of subpopulations, such as different experimental groups. In the SGPLOT procedure, you can use the CATEGORY= option on the VBOX statement to generate box plots for each level of a categorical variable.

Sometimes you need to overlay additional points or lines on box plots. SAS 9.4M1 and beyond supports overlaying "basic plots" and box plots. There are many different basic plot types, including the scatter plot and the series (line) plot.

This article shows examples when the X axis is discrete. In a subsequent article I will discuss the case of a continuous X axis.

You can use a trick to add multiple CONNECT= options. For example, if you want to connect the first, second, and third quartile values, you can repeat the VBOX statement multiple times, but use the NOFILL and NOOUTLIERS options on all but the first statement. The following statement provides an example. Notice that the NOCYCLEATTRS option prevents the plot from using different colors for the different VBOX statements: 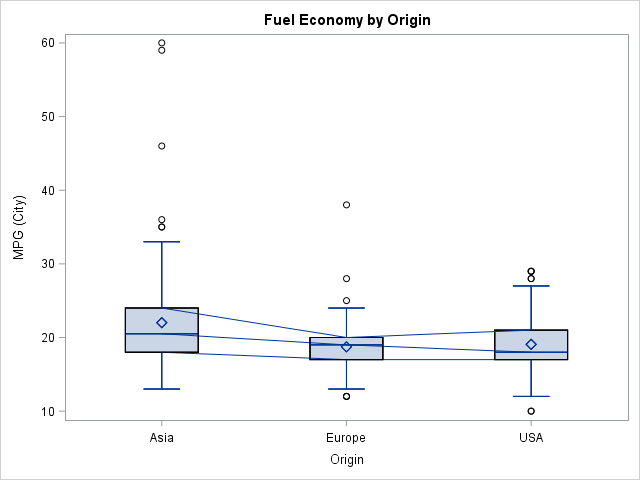 In a similar way you can overlay markers that represent special observations or reference values. For example, suppose the Sashelp.Class data set contains data about the heights and weights of a teacher's current students. When two new foreign exchange students (Ivan and Anna) are assigned to her class, she notices that these students are exceptionally tall compared to her current students. She decides to overlay the new student's heights on box plots (one for each gender) that show the height distributions of her current students. One way to do this is to create a box plot of the original data and then overlay a scatter plot of the new observations. 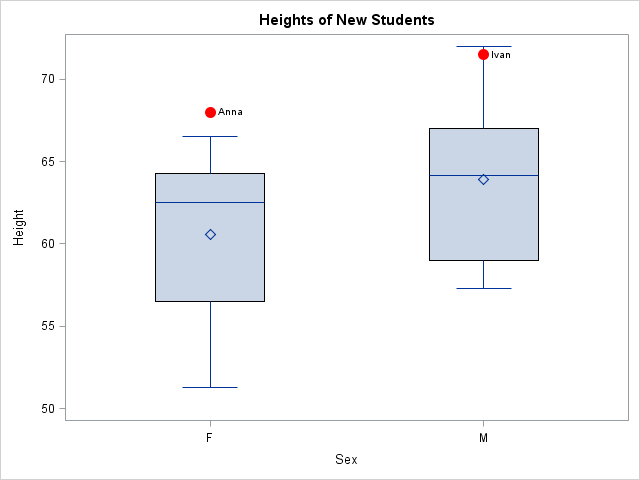 It is just as easy to overlay multiple plots. Recall that plots are rendered in the order that they appear in the SGPLOT procedure. This means that plots that change the background (such as a BLOCK plot) should be specified first, and plots that are use markers should be specified last. Another option is to use the TRANSPARENCY= option judiciously so that features in earlier plots are visible even though other plots are overlaid on top.

The following example demonstrates overlaying three plots. The plot shows the distribution of the fuel economy (measured as miles per gallon) for different kinds of vehicles. A block plot in the background emphasizes that hybrid vehicles have the best fuel economy. The box plot then shows the distribution of the fuel economy for six types of vehicles. The BOXWIDTH= option is used to control the width of the box plots. Lastly, the graph displays a scatter plot of the response variable for each model of vehicle. The JITTER option is used to reduce overplotting. 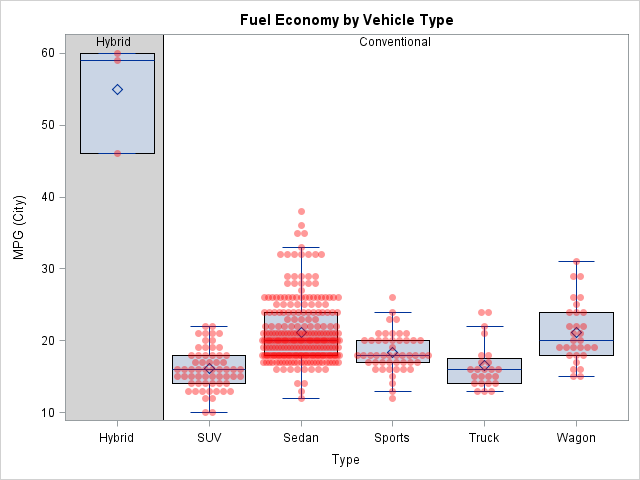 The resulting graph looks complicated, but is created by using only a few statements. Again, the key is that each of the three plot types share a common, discrete, X variable.

This article provides several examples of overlaying a box plot with other plots that share a discrete X axis. In my next blog post I will discuss how you can use box plots to summarize conditional distributions when the X axis is continuous.