I often see variations of the following question posted on statistical discussion forums:

I want to bin the X variable into a small number of values. For each bin, I want to draw the quartiles of the Y variable for that bin. Then I want to connect the corresponding quartile points from bin to bin.


In other words, the question asks how to create a plot like the following: 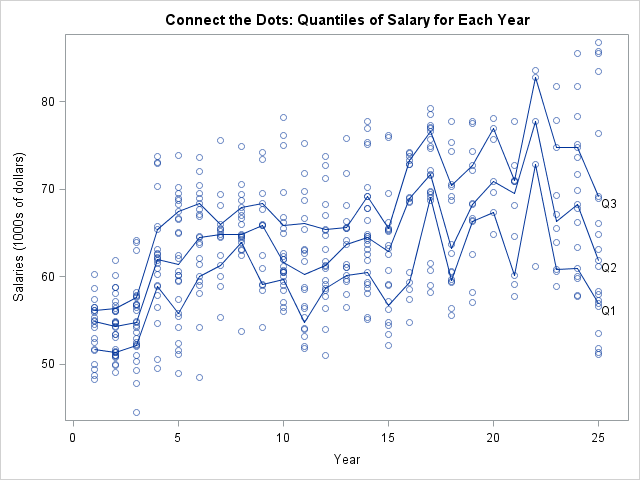 Start with the familiar: Standard regression

Before discussing quantile regression, let's introduce some data and think about a typical analysis. The data are salaries (in 1991) for 459 statistics professors in U.S. colleges and universities. A professor's salary (the response) is assumed to be related to his or her years of service (the explanatory variable). For these data, the explanatory variable is already binned into 25 discrete values. These data and this analysis are based on an example in the documentation for the QUANTREG procedure. You can download the data and the SAS statements that are used in this article.

A traditional regression analysis predicts the mean salary for a professor, given the years of service. In SAS, there are many regression procedures, such as the parametric GLM procedure and the nonparametric LOESS procedure. For these procedure, you can also call the regression directly from the SGPLOT procedure. For example, the following statements add a loess curve and a cubic regression curve to the data: 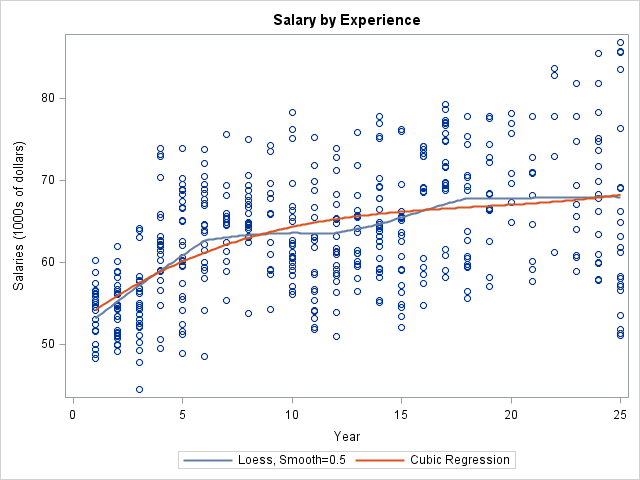 These regression curves smooth the data. For a parametric model, you can sometimes interpret the parameters of the model in terms of physical quantities. Do you believe that the mean salary of a professor depends smoothly on the number of years of service? These models reflect that assumption.

Now think for a moment about what we did not do. We did not compute the sample mean for each year and "connect the dots." That would result in a jagged line, which does not smooth the data. "Connecting the dots" is not a model; it does not provide insight into the relationship between salary and years of service, not does it accomodate random errors in the data.

Moving from means to quantiles

Given the number of years of service, each of the previous curves predicts the mean salary. Statistically speaking, the regression curves model the "conditional mean" of the response variable. However, you can also design a regression procedure to model the conditional median of the response. In fact, you can model other quantiles, such as the upper quartile (75th percentile), the lower decile (10th percentile), or other values.

What is quantile regression?

There have been several introductory papers written on quantile regression:

I don't intend to duplicate these papers. Instead, let's use PROC QUANTREG to compute a quantile regression and compare it with the binned quantile plot: 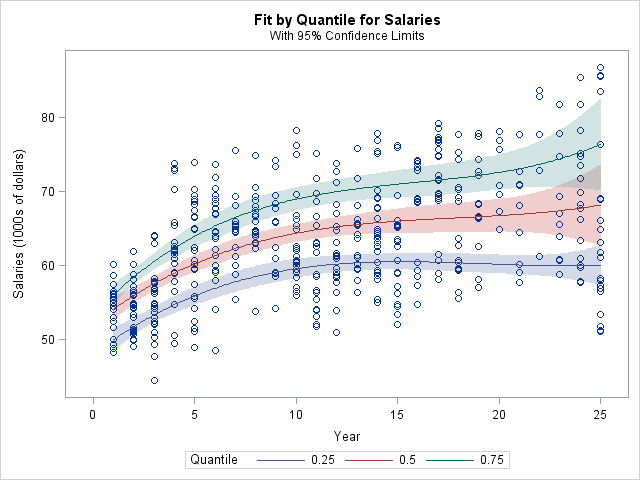 For these data, the model for the lower quartile increases for about 10 years, then levels off. The model for the conditional median is qualitatively similar to the cubic model for the conditional mean. The model for the upper quartile indicates a higher growth rate that for the median quartile. The quantile curves enable you to estimate how the inter-quartile range (the gap between the upper and lower quartiles) grows with time. For newly hired professors, only about $7,000 separates the relatively high salaries from the relatively low salaries. However, for professors with twenty or more years of experience, that gap has widened to more than $10,000.

When compared with the binned quantile plot at the beginning of this article, this quantile regression plot has several advantages:

So reach for quantile regression when you want to investigate how quartiles, quintiles, or deciles of the response variable change with covariates. The QUANTREG procedure is easy to run, and the results are superior to ad-hoc methods such as binning the data and connecting the sample quantiles.