For both kinds of walks, you can create a simulation by drawing the step at random. To find the walker's path, you form the cumulative sum of the steps. 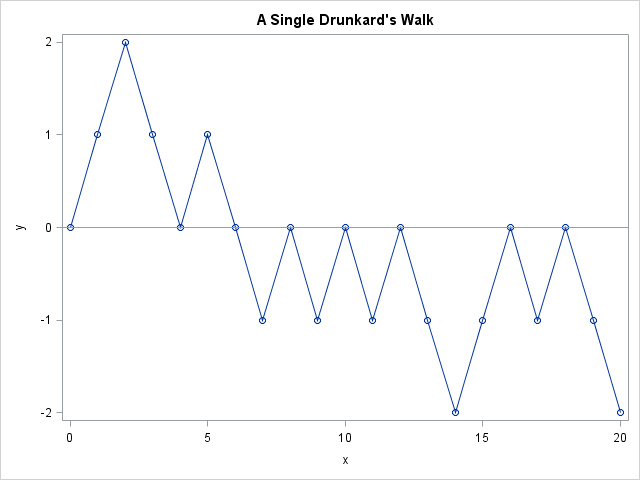 In a one-dimensional drunkard's walk, the drunkard takes a step to the left or to the right with probability 0.5. In the SAS DATA step, you can use the RAND function to draw from the Bernoulli distribution. You can do the same in the SAS/IML language, but SAS/IML also supports the SAMPLE function, which you can use to directly sample from a finite set such as {+1, -1}. The following SAS/IML statements simulate a drunkard's walk that begins at 0 and proceeds for 20 steps. A line plot of the drunkard's path is shown.

You can easily simulate 5,000 drunkards who all start at position 0. In the following simulation, each drunkard staggers randomly for 100 steps. The histogram shows the distribution of the positions of the 5,000 drunkards: 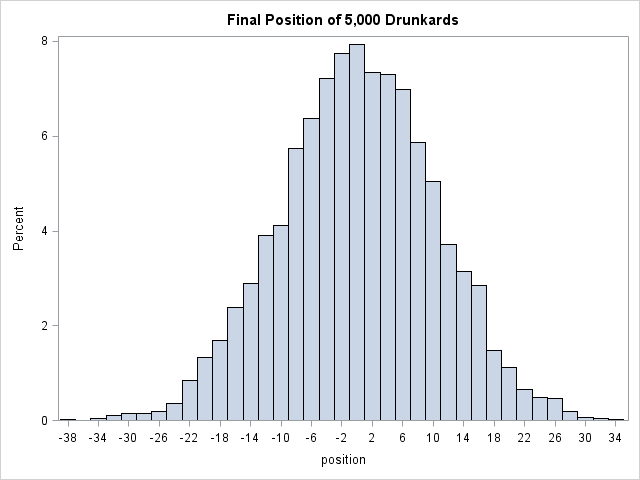 The final position is distributed like a binomial distribution, but with a twist. When n is even (as in this case), all the probability density is restricted to the even positions; when n is odd (such as the 99th step), the density is on the odd positions.

You can create a time series by forming the cumulative sums of the steps. The simulation created a matrix where each column represents the path of a single drunkard. To plot all of the paths on a single graph, it is convenient to convert the data from wide to long form. Then a call to the SCATTER routine plots all of the positions. The markers are semi-transparent so that overplotted points appear darker and the plot gives some indication of the density of the positions. 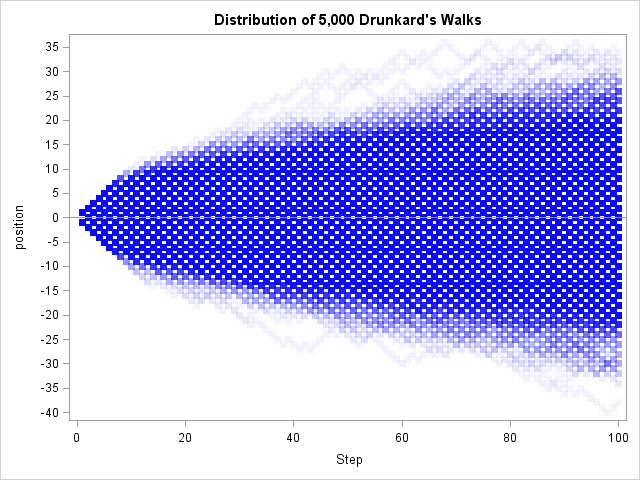 In conclusion, the drunkard's walk is an interesting variation of the random walk. In the drunkard's walk, the step size is always unit length. The location of a drunkard after n steps follows a binomial distribution on even or odd positions.

Although I demonstrated this simulation by using the SAS/IML language, it is straightforward to reproduce these results by using the DATA step and the SGPLOT procedure. I leave that exercise for the motivated reader.