Data. To a statistician, data are the observed values. To a SAS programmer, analyzing data requires knowledge of the values and how the data are arranged in a data set.

Sometimes the data are in a "wide form" in which there are many variables. However, to perform a certain analysis requires that you reshape the data into a "long form" where there is one identifying (ID) variable and another variable that encodes the value. I have previously written about how to convert data from wide to long format by using PROC TRANSPOSE. 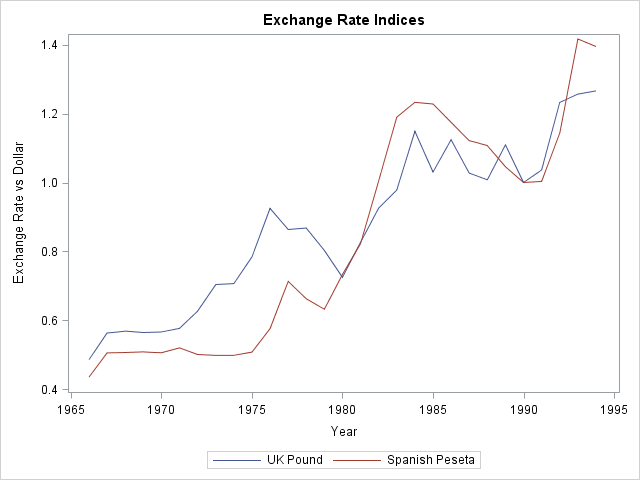 It is not difficult to specify two SERIES statements, but suppose that you want to plot 20 series. Or 100. (Plots with many time series are sometimes called "spaghetti plots.") It is tedious to specify many SERIES statements. Furthermore, if you want to change attributes of every line (thickness, transparency, labels, and so forth), you have to override the default options for each SERIES statement. Clearly, this becomes problematic for many variables. You could write a macro solution, but the next section shows how to reshape the data so that you can easily plot multiple series.

From wide to long in Base SAS

A simpler way to plot multiple series is to reshape the data. The following call to PROC TRANSPOSE converts the data from wide to long form. It manipulates the data as follows:

The original data set contained 29 rows, one X variable (Year) with unique values, and two response variables (ExUK and ExSp). The new data set contains 58 rows, one X variable (Year) with duplicated values, one response variable (ExchangeRate), and an discrete variable (Country) that identifies whether each exchange rate is for the British pound or for the Spanish Peseta. For the new data set, you can recreate the previous plot by using a single SERIES statement and specifying the GROUP=COUNTRY option:

The resulting graph is almost identical to the one that was created earlier. The difference is that now it is easier to change the attributes of the lines, such as their thickness or transparency.

Create a panel of plots

If you want to see each time series in its own plot, you can use the SGPANEL procedure, which also requires that the data be in the long form: 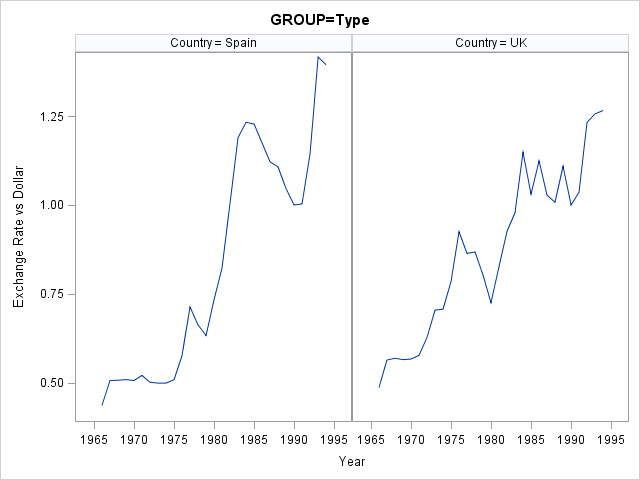 Notice that you do not need to sort the data by the Country variable in order to use the PANELBY statement. However, if you want to conduct a BY-group analysis of these data, then you can easily sort the data by using PROC SORT.