When you are working with probability distributions (normal, Poisson, exponential, and so forth), there are four essential functions that a statistical programmer needs. As I've written before, for common univariate distributions, SAS provides the following functions:

Evaluating the multivariate versions of these functions is harder. As I showed last week, you can define the multivariate PDF function by using the SAS/IML language. SAS/IML software also provides several built-in functions for simulating random variates from various useful multivariate distributions, and my forthcoming book describes how to simulate data from additional distributions.

Don't use the PROB* functions! (Except two)

I used SAS for many years before I learned about the PROBBNRM function. Why? Because when I look at the documentation for SAS functions, I've trained my eyes to skip over all of the functions that begin with "PROB" because these functions are replaced by the newer CDF function, which can compute the CDF for many univariate distributions.

Then one day I saw a reference to the PROBBNRM function in a journal article. I looked it up in the SAS documentation and have used it ever since!

Oh, and the PROBMC function is also useful. I've used it to compute decision limits for multiple comparisons.

The following SAS/IML statements test these facts, as a way of making sure that PRBBNRM function behaves like we expect:

The limiting cases are as expected. So what does the graph of the bivariate CDF look like over, say, [-3,3]×[-3,3]? Well, the CDF is essentially zero near (-3,-3) and essentially 1 near (3,3). If you fix any value x=x0, the function is monotone increasing as a function of y. By symmetry, the same holds if you reverse the roles of x and y. To visualize the function, you can use the same steps that I used to visualize the bivariate normal PDF: 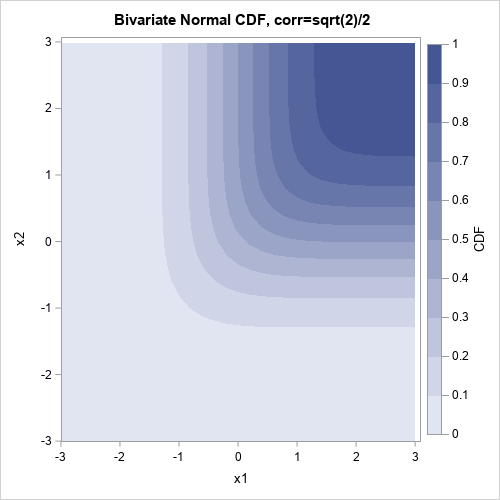 The contour plot of the bivariate normal CDF also shows quantiles of the CDF. By definition, the quantiles for α are the set of points for which CDF(x1,x2) = α. These are exactly the contours of the CDF function.