One of my New Year's resolutions is to learn a new area of statistics. I'm off to a good start, because I recently investigated an issue which started me thinking about spatial statistics—a branch of statistics that I have never formally studied.

During the investigation, I asked myself: Given an configuration of points in a rectangle, how can I compute a statistic that indicates whether the configuration is uniformly spread out in the region?

One way to investigate this question is to look at the density of points in the configuration. Are the points spread out or clumped together?

In the one-dimensional case, you can use a histogram to visually examine the density of univariate data. If you see that the heights of the bars in each bin are roughly the same height, then you have visual evidence that the data are uniformly spaced.

Of course, you don't really need the histogram: the counts in each bin suffice. You can divide the range of the data into N equally spaced subintervals and write SAS/IML statements that count the number of points that fall into each bin.

The following SAS/IML module uses this algorithm to count the number of points in each cell. Notice that the algorithm loops over the subdivisions of the grid, rather than over the observations.

A convenient way to test the module is to generate 100 random uniform points in a rectangle and print out the counts. The following example counts the number of points in each of 20 bins. There are five bins in each horizontal row and four bins in each vertical column. 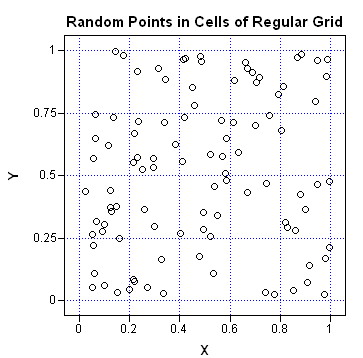 A visualization of the random points and the grid is shown in the scatter plot. From the graph, you can quickly estimate that each bin has between 1–10 points. The exact counts are contained in the count matrix. 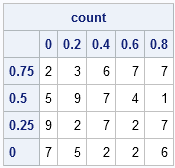 You can use these bin counts to investigate the density of the point pattern. I'll present that idea on Friday.