Usually, simulation studies are based on real data. From a set of data, you run a statistical model that estimates parameters. Assuming the model fits the data, you can simulate new data by using the estimates as if they were the true parameters for the model. When you start with real data, you obtain simulated data that often have similar statistical properties.

However, sometimes you might want to simulate data for an example, and you don't have any real data to model. This is often the case on online discussion forums such as the SAS Support Community. Often, a user posts a question but cannot post the data because it is proprietary. In that case, I often simulate data to demonstrate how to use SAS to answer the question. The simulation is usually straightforward for univariate data or for data from an ordinary least squares regression model. However, the simulation can become complicated for generalized linear regression models and nonlinear models. Why? Because not every choice of parameters leads to a reasonable data set. For example, if you choose parameters "out of thin air" in an arbitrary manner, you might end up with a model for which the probability of the event (Pr(Y=1)) is close to 1 for all values of the explanatory variables. This model is not very useful.

It turns out that you can sometimes "fix" your model by decreasing the value of the intercept parameter in the model. This reduces the value of Pr(Y=1), which can lead to a more equitable and balanced distribution of the response values. 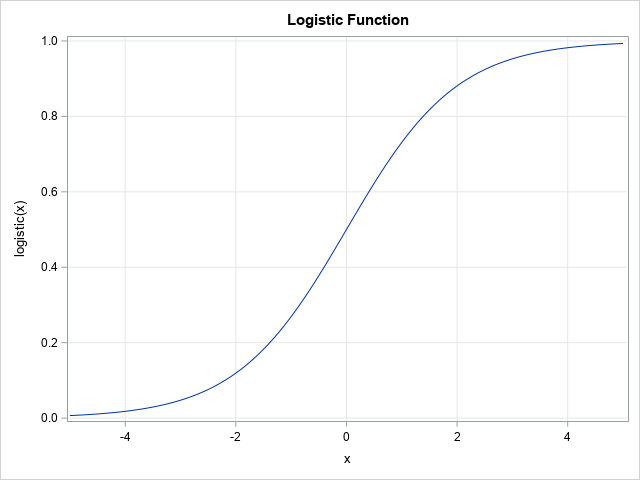 Let's construct an example. For a general discussion and a multivariate example, see the article, "Simulating data for a logistic regression model." For this article, let's keep it simple and use a one-variable model. Let X be an independent variable that is distributed as a standardized normal variate: X ~ N(0,1). Then choose an intercept parameter, β0, and a slope parameter, β1, and form the linear predictor η = β0 + β1 X. A binary logistic model uses a logistic transformation to transform the linear predictor to a probability: μ = logistic(η), where logistic(η) = 1 / (1 + exp(-η)). The graph of the S-shaped logistic function is shown to the right. You can then simulate a response as a Bernoulli random variable Y ~ Bern(μ).

In SAS, the following DATA step simulates data from a standard normal variable:

Regardless of the distribution of X, the following DATA step simulates data from a logistic model that has a specified set of values for the regression parameters. I embed the program in a SAS macro so that I can run several models with different values of the Intercept and Slope parameters. The macro also runs PROC FREQ to determine the relative proportions of the binary response Y=0 and Y=1. Lastly, the macro calls PROC SGPLOT to display a graph that shows the logistic regression model and the "observed" responses as a function of the linear predictor values,

How does the probability of the event depend on the intercept?

Let's run the program. The following call uses an arbitrary choice of values for the regression parameters: Intercept=5 and Slope=2: 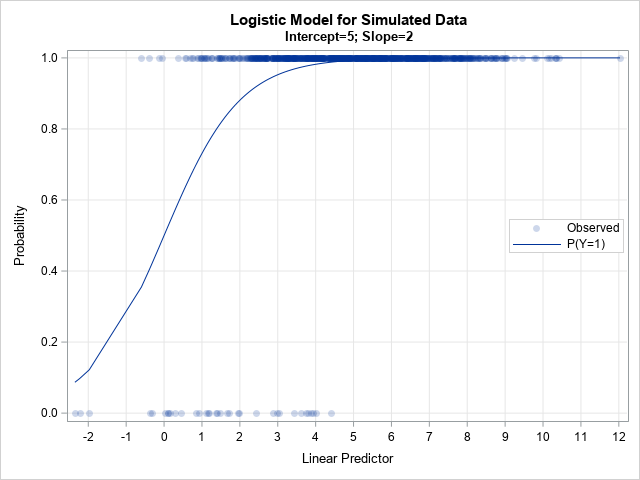 The output shows what can happen if you aren't careful when choosing the regression parameters. For this simulation, 96.5% of the response values are Y=1 and only a few are Y=0. This could be a satisfactory model for a rare event, but not for situations in which the ratio of events to nonevents is more balanced, such as 75-25, 60-40, or 50-50 ratios.

Since you have complete control of the parameters in the simulation, you can adjust the parameters. If you shift η to the left, the corresponding probabilities will decrease. For example, if you subtract 4 from η, then the range of η becomes [-6, 8], which should provide a more balanced distribution of the response category. The following statement implements this choice: 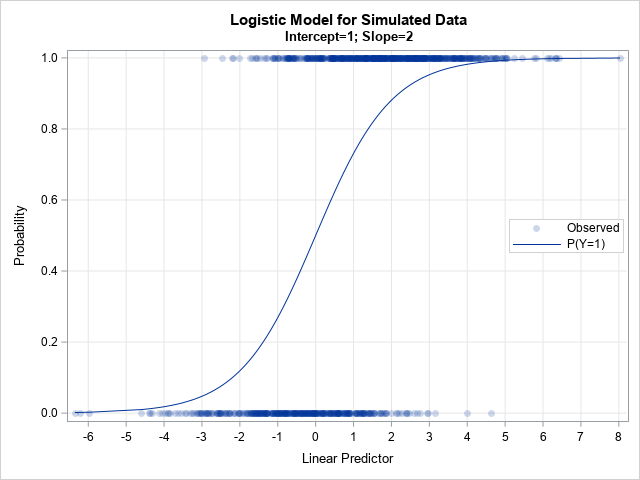 The output shows the results of the simulation after decreasing the intercept parameter. When the Intercept=1 (instead of 5), the proportion of simulated responses is more balanced. In this case, 63% of the responses are Y=1 and 37% are Y=0. If you want to further decrease the proportion of Y=1, you can decrease the Intercept parameter even more. For example, if you run %SimLogistic(-1, 2), then only 35.9% of the simulated responses are Y=1.

I have demonstrated that decreasing η (the linear predictor) also decreases μ (the probability of Y=1). This is really a simple mathematical consequence of the formula for the logistic function. Suppose that η1 < η2. Then -η1 > -η2
⇒    1 + exp(-η1) > 1 + exp(-η2) because EXP is a monotonic increasing function
⇒    1 / (1 + exp(-η1)) < 1 / (1 + exp(-η2)) because the reciprocal function is monotonic decreasing
⇒    μ1 < μ2 by definition.
Therefore, decreasing η results in decreasing μ For some reason, visualizing the simulation makes more of an impact than the math.