The result is attributed to Zinani, A. (2003) "The Expected Volume of a Tetrahedron whose Vertices are Chosen at Random in the Interior of a Cube," which is behind a paywall. The abstract says that the analytical result is exactly
E[Volume] = 3977 / 216000 - π2 / 2160
and that this number is "in convincing agreement with a simulation."

This article shows how to run a Monte Carlo simulation in SAS to simulate random tetrahedra and compute their volumes. We use the simulation to confirm Zinani's result and to visualize the distribution of the volume.

The volume of a tetrahedron 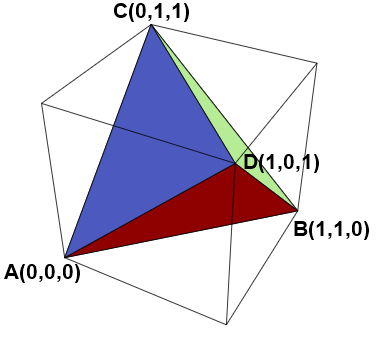 Compute the volume of a tetrahedron in SAS

It is not hard to write a SAS/IML program that generates four random vertices for a tetrahedron inside the unit cube in 3-D. To generate the four vertices, you can generate 12 uniform variates independently in the interval [0,1]. Assign the first three numbers to be the (x,y,z) Euclidean coordinates of the first vertex, the next three numbers to be the coordinates of the second vertex, and so forth. From the vertices, you can call the VolumeTetra function to produce the volume.

The following program generates 100,000 random tetrahedra and computes their volumes. The program then calls the MEAN function computes the average volume, which is the Monte Carlo estimate of the expected value.

The output shows that the Monte Carlo estimate is very close to the expected value. This confirms Zinani's result: the average volume of a random tetrahedron is smaller than you might think.

Visualize the distribution of volumes

The expected value for the distribution of tetrahedral volumes is small. Since we know that at least one tetrahedron has a relatively large value (1/3), we might conjecture that most of the tetrahedra have very small volumes and only a few have larger volumes. A way to test that conjecture is to visualize the distribution by drawing a histogram of the volumes for the 100,000 random tetrahedra. The following SAS/IML statements write the expected value to a macro variable and write the volumes of the random tetrahedra to a data set. PROC UNIVARIATE then computes descriptive statistics for the volumes and plots a histogram of the distribution of volumes: 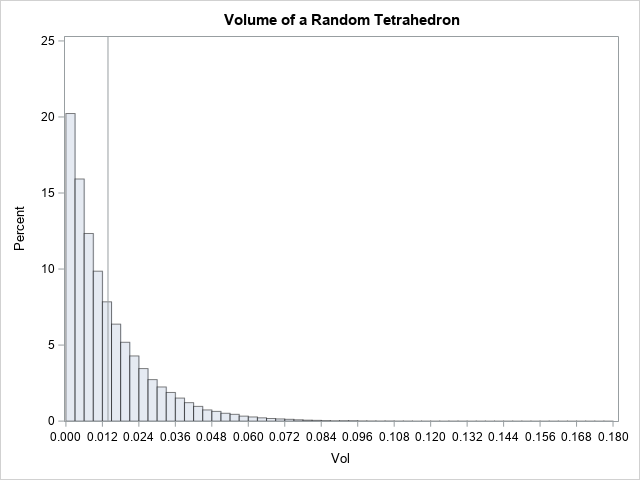 The graph indicates that a random tetrahedron is likely to have a volume that is near 0. The vertical line is the expected value of the distribution. Notice that only a small proportion of the tetrahedra have volumes that exceed 0.1. In this collection of 100,000 random tetrahedra, the largest volume was 0.1777, which is about 50% of the volume of the largest possible tetrahedron. The distribution has a long but thin tail. 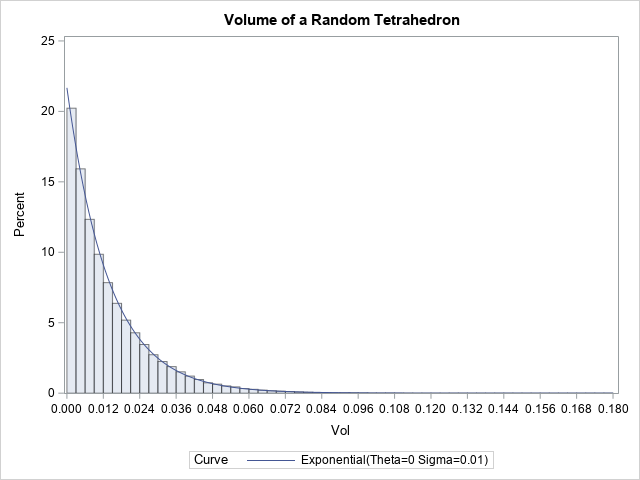 The fit is excellent! Not only does the density curve overlay perfectly on the histogram, but the quantiles of the data (not shown) are in excellent agreement with the expected quantiles of the exponential distribution. If you look at the Q-Q plot, you again see excellent agreement between the data and the exponential model. The only shortcoming is that the simulated volumes have fewer extreme values than predicted by the model. 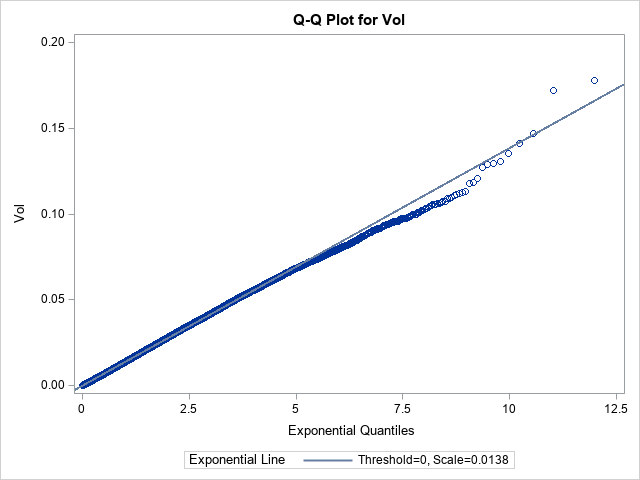 The model enables you to compute the probability of certain events. For example, the probability that a random tetrahedron has volume greater than 0.1 is 1-cdf("Expo", 0.1, &EV), which is 0.00073.

A result by Zinani (2003) gives the expected volume of a tetrahedron whose vertices are chosen uniformly at random in the unit cube. Zinani's result is E[Volume] = 0.0138427757.... Although this number seems surprisingly small, the expected value is confirmed by using a Monte Carlo simulation in SAS. The simulation suggests that the volumes are exponentially distributed.

For an alternative mathematical proof of the result, see Philip, J. (2007) "The Expected Volume of a Random Tetrahedron in a Cube", which is free to view and is very well written.