The following DATA step computes the coordinates of the polar rose for k=5. The subsequent call to PROC SGPLOT graphs the curve. 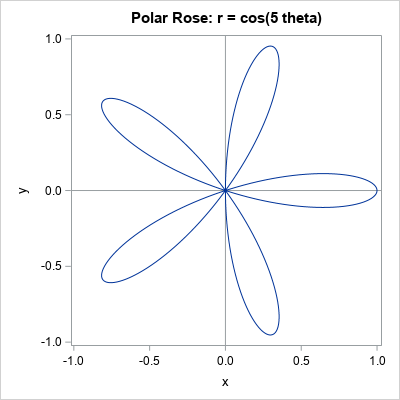 The remainder of this article uses Monte Carlo simulation to estimate the area of the five-petaled rose. The answer is well-known and is often proved in a calculus class. When k is odd, the area of the rose generated by r = cos(k θ) is A = π / 4 ≈ 0.7854.

To estimate the area of a geometric figure by using Monte Carlo simulation, do the following:

The Monte Carlo method produces a simulation-based estimate. The answer depends on the random number stream, so you obtain AN estimate rather than THE estimate. In this article, the rose will be bounded by using the rectangle [-1, 1] x [-1, 1], which has area AR = 4. 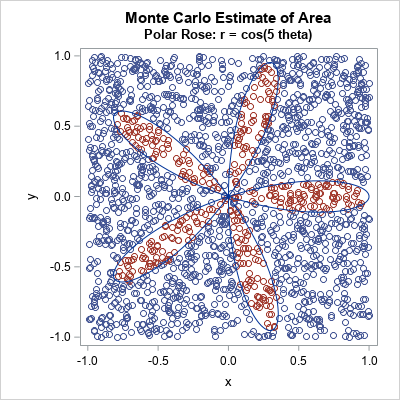 Statistical theory suggests that the accuracy of the proportion estimate should be proportional to 1/sqrt(N). This statement has two implications:

A Monte Carlo implementation in the SAS DATA step

Let's increase the number of simulated points to improve the accuracy of the estimates. We will use one million (1E6) random points in the bounding rectangle.

There are two primary ways to obtain the Monte Carlo estimate. The first way is to generate a data set that has N random points and contains a binary indicator variable that specifies whether each point is inside the figure. You can then use PROC FREQ to obtain an estimate of the binomial proportion and a confidence interval for the proportion, as follows: 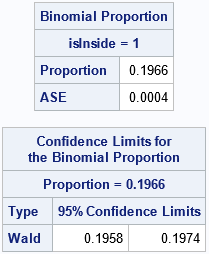 If you are comfortable with programming the binomial proportion yourself, you can perform the entire computation inside a DATA step without using PROC FREQ. The advantage of this method is that you do not generate a data set that has N observations. Rather, you can count the number of random points that are inside the rose, and merely output an estimate of that area and a confidence interval. By using this method, you can simulate millions or billions of random points without writing a large data set. The following DATA step demonstrates this technique:

Notice that this DATA step outputs only one observation, whereas the previous DATA step created N observations, which were later read into PROC FREQ to estimate the proportion. Also, this second program multiplies the proportion and the confidence interval by the area of the bounding rectangle. Thus, you get the estimates for the area of the figure, not merely the estimates for the proportion of points inside the figure. The two answers are the same because both programs use the same set of random points.

Regarding the accuracy of the computation, notice that the confidence interval for the proportion is based on the standard error computation, which is zα sqrt(p*(1-p)/N). This quantity is largest when p=1/2 and zα = 1.96 for α = 0.05. Thus, for any p, the standard error is less than 1/sqrt(N). This is what I meant earlier when I claimed that the estimate of the proportion is likely to be within 1/sqrt(N) units from the true proportion. Of course, your estimates for the area might not be that small if the area of the bounding rectangle is large. The estimate of the area is likely to be AR/sqrt(N) units from the true area. But by choosing N large enough, you can make the error as small as you like.

This article shows how to use the SAS DATA step to perform a Monte Carlo approximation for the area of a bounded planar figure, the five-petaled polar rose. The key to the computation is being able to assess whether a random point is inside the figure of interest. If you can do that, you can estimate the area by using the proportion of random points inside the figure times the area of the bounding rectangle.

The article shows two implementations. The first writes the binary indicator variable to a SAS data set and uses PROC FREQ to compute the proportion estimate. To estimate the are, multiply the proportion by the area of the bounding rectangle. The second implementation performs all computations inside the DATA step and outputs only the estimates of the proportion and the area.