Today is March 14th, which is annually celebrated as Pi Day. Today's date, written as 3/14/16, represents the best five-digit approximation of pi.

On Pi Day, many people blog about how to approximate pi. This article uses a Monte Carlo simulation to estimate pi, in spite of the fact that "Monte Carlo methods are ... not a serious way to determine pi" (Ripley 2006, p. 197). However, this article demonstrates an important principle for statistical programmers that can be applied 365 days of the year. Namely, I describe two seemingly equivalent Monte Carlo methods that estimate pi and show that one method is better than the other "on average." 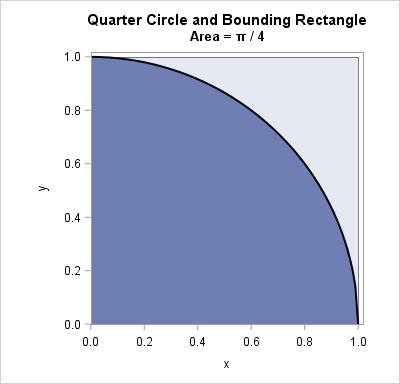 There are dozens of ways to use Monte Carlo simulation to estimate pi. Two common Monte Carlo techniques are described in an easy-to-read article by David Neal (The College Mathematics Journal, 1993).

In calculus you learn that the average value of a continuous function f on the interval [a, b] is given by the following integral:

If you can estimate the left hand side of the equation, you can multiply the estimate by 4 to estimate pi.

In spite of generating a random sample of size 10,000, the average value of this sample is only within 0.01 of the true value of pi. This doesn't seem to be a great estimate. Maybe this particular sample was "unlucky" due to random variation. You could generate a larger sample size (like a million values) to improve the estimate, but instead let's see how the area method performs.

The estimate is within 0.0008 of the true value, which is closer than the value from the average value method.

Can we conclude from one simulation that the second method is better at estimating pi? Absolutely not! Longtime readers might remember the article "How to lie with a simulation" in which I intentionally chose a random number seed that produced a simulation that gave an uncharacteristic result. The article concluded by stating that when someone shows you the results of a simulation, you should ask to see several runs or to "determine the variance of the estimator so that you can compute the Monte Carlo standard error."

The variance of the Monte Carlo estimators

I confess: I experimented with many random number seeds before I found one that generated a sample for which the average value method produced a worse estimate than the area method. The truth is, the average values of the function usually give better estimates. To demonstrate this fact, the following statements generate 1,000 estimates for each method. For each set of estimates, the mean (called the Monte Carlo estimate) and the standard deviation (called the Monte Carlo standard error) are computed and displayed: 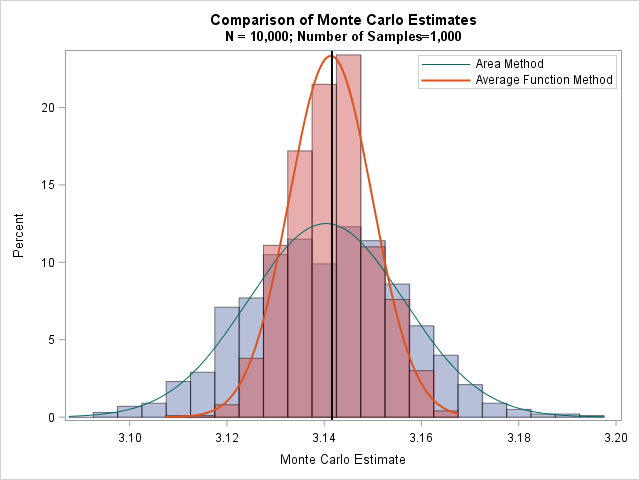