In my article on Buffon's needle experiment, I showed a graph that converges fairly nicely and regularly to the value π, which is the value that the simulation is trying to estimate. This graph is, indeed, a typical graph, as you can verify by running the simulation yourself.

However, notice that the graph dips down to about π after about 300 iterations before increasing. This means that you could cheat. You could run the simulation for about 300 iterations and proclaim "Look how well this method does! And it only took 300 iterations!" In fact, if you use exactly 321 iterations, the estimate for π is 3.145, which is pretty close to the true value. 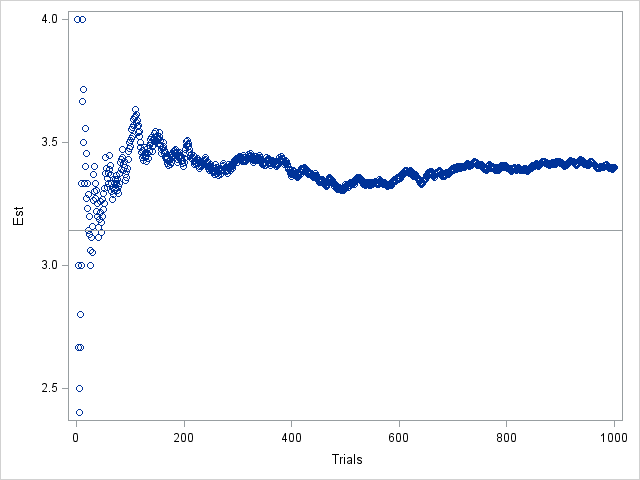 Not only is the estimate for N=1000 far from π, but the graph looks like it has converged to an entirely different value. If you are developing the algorithm and you see the previous graph, you might erroneously think that there is a bug in your program.

Of course, if you run the program for, say, 50000 iterations, you will see that the graph does eventually converge to the value π, as shown in the following graph that uses the same "bad" seed: 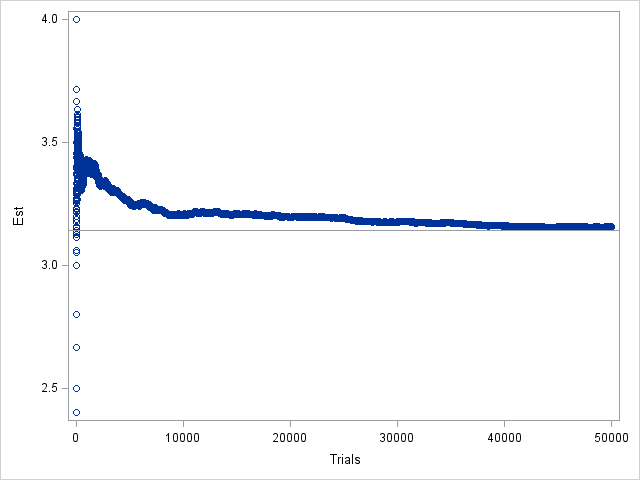 These graphs tell an important cautionary tale and remind us that samples—even simulated samples!—contain sampling variability. Therefore, be cautious of claims that are based on a single run of a simulation. Also, when you write a simulation, you should occasionally change the random number seed, just to see how the seed affects the simulation.

By the way, there are other "Buffon's needle estimators" that correspond to different experimental conditions and that have smaller variance, but, nevertheless, "because of the convergence rate 1/sqrt(N), Monte Carlo methods are ... not a serious way to determine π" (Ripley, p. 197).

So, next time that someone else shows you the results of a simulation, make two requests: