A genetic algorithm (GA) is a heuristic optimization technique. The method tries to mimic natural selection and evolution by starting with a population of random candidates. Candidates are evaluated for "fitness" by plugging them into the objective function. The characteristics of the better candidates are combined to create a new set of candidates. Some of the new candidates experience mutations. Eventually, over many generations, a GA can produce candidates that approximately solve the optimization problem. This article uses SAS/IML to implement a genetic algorithm in SAS.

A previous article discusses the mutation and crossover operators, which are important in implementing a genetic algorithm. In previous articles, the solution vectors were represented by column vectors. In the GA routines, candidates are row vectors. The population is a matrix, where each row represents an individual.

The main steps in a genetic algorithm

Each potential solution is represented as an N-dimensional vector of values. For the knapsack problem, you can choose a binary vector. In SAS/IML, you use the GASETUP function to define the encoding for a problem. The SAS/IML language supports four different encodings. The knapsack problem can be encoded by using an integer vector, as follows:

The GASETUP function returns an identifier for the problem. This identifier must be used as the first argument to subsequent calls to GA routines. It is possible to have a program that runs several GAs, each with its own identifier. The GASETUP call specifies that candidate vectors are integer vectors. Later in the program, you can tell the GA that they are binary vectors.

In previous articles, I discussed fitness, mutation, and crossover functions:

The following SAS/IML statements define the fitness module (ObjFun), the mutation module (Mutate), and the crossover module (Cross) and register these modules with the GA system.

A genetic algorithm pits candidates against each other according to Darwin's observation that individuals who are fit are more likely to pass on their characteristics to the next generation.

At this point, the GA problem is fully defined.

You can use the GAINIT subroutine to generate the initial population. Typically, the initial population is generated randomly. If there are bounds constraints on the solution vector, you can specify them. For example, the following call generates a very small population of 10 random individuals. The chromosomes are constrained to be binary by specifying a lower bound of 0 and an upper bound of 1 for each element of the integer vector. 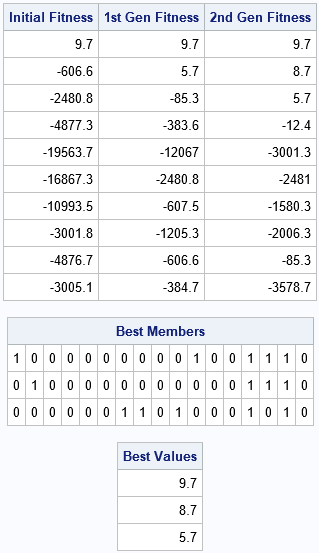 After the second call to GAREGEN, the GAGETMEM call gets the candidates in positions 1:3. Recall that you specified three "elite" members in the GASETSEL call. The elite members are therefore placed at the top of the population. (The remaining individuals are not sorted according to fitness.) The chromosomes for the elite members are shown. In this encoding, each chromosome is a 0/1 binary vector that determines which objects are placed in the knapsack and which are left out.

Evolution towards a solution

The previous section purposely used a small population of 10 individuals. Such a small population lacks genetic diversity and might not converge to an optimal solution (or at least not quickly). A more reasonable population contains 100 or more individuals. You can use the GAINIT call a second time to reinitialize the initial population. Now that you have experience with the GAREGEN and GAGETVAL calls, you can use those calls in a DO loop to iterate over many generations. The following statements iterate the initial population through 15 generations. For each generation, the program records the best fitness score (f[1]) and the median fitness score. 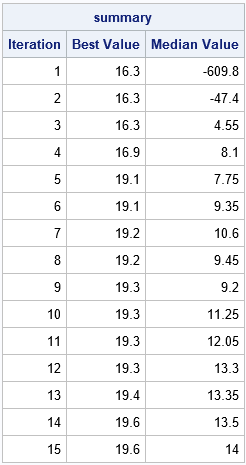 The output shows that the fitness of the best candidate is monotonic. It increases from an initial value of 16.3 to the final value of 19.6, which is the optimal value. Similarly, the median value tends to increase. Because of random mutation and the crossover operations, statistics such as the median or mean are usually not monotonic. Nevertheless, the fitness of later generations tends to be better than for earlier generations.

You can examine the chromosomes of the elite candidates in the final generation by using the GAGETMEM subroutine: 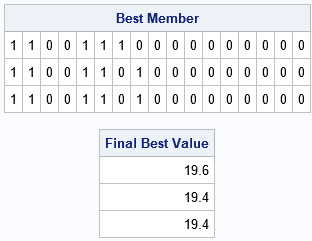 The output confirms that the best candidate is the same binary vector as was found by using a constrained linear program in a previous article.

The GA algorithm maintains an internal state, which enables you to continue iterating if the current generation is not satisfactory. In this case, the problem is solved, so you can use the GAEND subroutine to release the internal memory and resources that are associated with this GA. After you call GAEND, the identifier becomes invalid.

The advantages and disadvantage of genetic algorithms

As with any tool, it is important to recognize that a GA has strengths and weaknesses. Strengths include:

In summary, this article shows how to use low-level routines in SAS/IML software to implement a genetic algorithm. Genetic algorithms can solve optimization problems that are intractable for traditional mathematical optimization algorithms. Like all tools, a GA has strengths and weaknesses. By gaining experience with GAs, you can build intuition about when and how to apply this powerful method.

For other ways to use genetic algorithms in SAS, see the GA procedure in SAS/OR software and the black-box solver in PROC OPTMODEL.