I recently wrote about how to solve a famous optimization problem called the knapsack problem. In the knapsack problem, you assume that a knapsack can hold W kilograms. There are N objects whose values and weights are represented by elements of the vectors v and w, respectively. The goal is to maximize the value of the objects you put into the knapsack without exceeding a weight constraint, W.

As shown in my previous article, the knapsack problem can be solved by using integer linear programming to find a binary (0/1) solution vector that maximizes v`*b subject to the constraint w`*b ≤ W.

The problem I needed to solve was similar to the knapsack problem, so let's examine what happens if you reformulate the knapsack problem to eliminate the constraint on the weights. The idea is to introduce a penalty for any set of weights that exceed the limit. For example, if a candidate set of items have weight Wc > W, then you could subtract a positive quantity such as λ*(Wc - W)2. If the penalty parameter λ > 0 is large enough, then subtracting the penalty term will not affect the optimal solution, which we are trying to maximize. (If you are minimizing an objective function, then ADD a positive penalty term.) Notice that the penalty term destroys the linearity of the objective function.

The following SAS/IML program demonstrates how to use an IF-THEN statement to include a penalty term in the objective function for the knapsack problem: 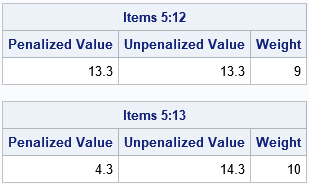 You can visualize how the penalty works by generating many random binary vectors. The following statements generate 1,000 random binary vectors where the probability of generating a 1 is 0.3. For each random vector, the program calls the penalized objective function to obtain a (penalized) value of the items. A scatter plot displays the penalized value versus the weight of the items. 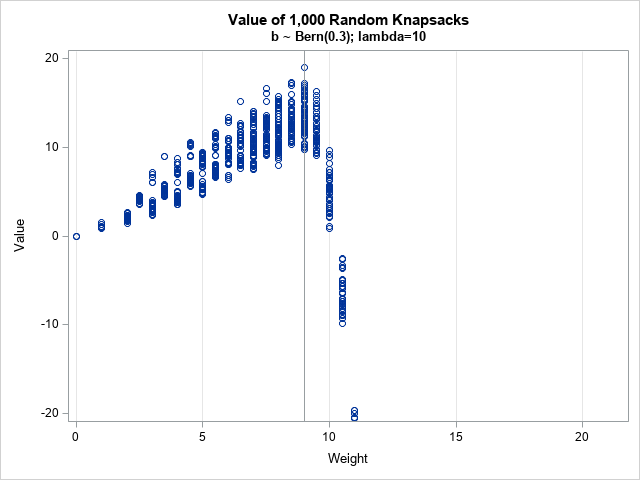 For each random binary vector, the ObjFun function returns the penalized value. The graph shows that, on average, the penalized value peaks when the weight is 9 kg, which is the maximum weight the knapsack can hold. If the collective weight of the items exceeds 10, the "value" is actually NEGATIVE for this example! Although the graph shows only 1,000 random choices for the b vector, it is representative of the behavior for the full 217 = 131,072 possible values of b.

The graph provides evidence that you can maximize the unconstrained penalized objective function and find the same optimal value, provided that the coefficient of the penalty term is large enough.

Choosing the penalty term: A little bit of math

What does "large enough" mean? In the example, I used λ=10, but is 10 large enough? Can you find a value for λ that guarantees that the solution of the penalized problem satisfies the constraint?

You can examine the data to find a lower bound for λ. You want the numerator to be as large as possible and the denominator to be as small as possible. The largest value for the numerator is the total value of the items, sum(v). The smallest value for the denominator is the minimum difference between the weights of items, which is 0.5 for this example. Therefore, for this example, λ ≥ 4*sum(v) will ensure that the solution of the unconstrained penalized objective function is also a solution for the constrained problem. This bound is not tight; you can choose a smaller value with a little more effort.

Even if something is possible, it is not necessarily a good idea. Solving a linear problem with linear constraints can be done very efficiently. If you introduce a penalty term, the objective function is no longer linear, and solving the problem might require more computational resources. Now that I think about it, it was a mistake to reformulate my problem.