Of course, generating all bootstrap samples is impractical for even moderate values of N. Furthermore, bootstrap samples like this are improbable if the probability of choosing each observation is 1/N. But what if you assign a higher probability to select some observations and a lesser probability to others? For example, the sample that has six 4s is not improbable if the probability of choosing the 4 is 0.9. If you sample with unequal probability (and still with replacement) the statistics in the samples might be very different from the statistics in the original data.

This kind of sampling is no longer classical bootstrap sampling. It could be considered a kind of importance sampling. Whatever you call it, each sample you generate is a resampling from the original data, but you can control the kinds of samples that you generate by adjusting the probability of selecting each observation.

To illustrate sampling with unequal probability, consider the following data with N=1000 that are simulated from a uniform distribution on [0, 20]:

Suppose you are seeking a resample that has unusual properties, such as Mean=9 and StdDev=3. It would be highly unusual to obtain these statistics by using the usual method of resampling observations with equal probability. However, you can assign a high probability to observations whose values are near the value 9. The following DATA step uses the normal density function for the N(9,3) distribution to assign the probability of selecting an observation:

You can use the METHOD=PPS_WR option to resample from the data by using this probability of selecting each observation. The following call to PROC SURVEYSELECT generates a resample of size N from the data but gives preference to observations that are closer to x=9.

The output from PROC MEANS shows that for these uniformly distributed data, you can obtain a resample whose mean and standard deviations are close to the target values. Of course, using a different random number seed will result in a different resample and different statistics.

You can create a graph to visualize the observations that were chosen for this resample. The following graph plots the NumberHits variable, which records the number of times that each observation appears in the sample: 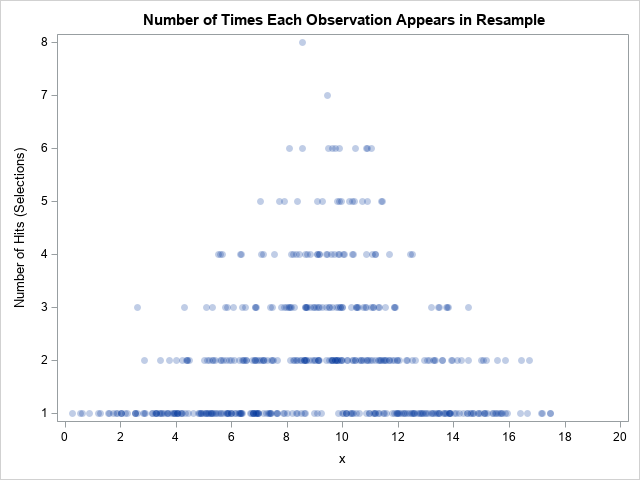 Random samples whose statistics are close to target values

If you change the random number seed, you will get a different resample that has different statistics. If you repeat this process many times, you can choose the resample whose statistics are closest to the target values. You can add the REPS= option to PROC SURVEYSELECT to generate additional resamples. This creates a variable (Replicate) that you can use as a BY-group variable in PROC MEANS. For each (Mean, StdDev) pair, you can compute a distance to the target value. You can then sort the statistics and identify the resamples whose statistics are closest to the target, as follows:

Why the example works

It is possible to turn this example into a general-purpose method for finding a resample that has statistics that are close to target values. However, it requires some additional work. I will outline why this example works and what is required to generalize the example.

For this example, the data has a uniform density, so it was easy to choose a value for g(x) so that the expected mean and variance matches target values. For data that has a non-uniform density, the process is more complicated because you must consider the convolution of f(x) and g(x).

Even for this example, you might not be able to match every set of target values. For example, you probably can't find a resample that has a large mean and also a large variance.

This article considers whether it is possible to find a resample that has a desired set of statistics. A classical bootstrap sample selects observations with replacement and with uniform probability. With high probability, the bootstrap sample has statistical properties that are somewhat similar to the original data. However, if you sample with nonuniform probability, you can obtain resamples whose statistical properties are quite different from the original data. The article uses the METHOD=PPS_WR option in PROC SURVEYSELECT to create an example in the special case where the data are uniformly distributed.