A SAS customer asked a great question: "I have parameter estimates for a logistic regression model that I computed by using multiple imputations. How do I use these parameter estimates to score new observations and to visualize the model? PROC LOGISTIC can do the computation I want, but how do I tell it to use the externally computed estimates?"

This article presents a solution for PROC LOGISTIC. At the end of this article, I present a few tips for other SAS procedures.

Here's the main idea: PROC LOGISTIC supports an INEST= option that you can use to specify initial values of the parameters. It also supports the MAXITER=0 option on the MODEL statement, which tells the procedure not to perform any iterations to try to improve the parameter estimates. When used together, you can get PROC LOGISTIC to evaluate any logistic model you want. Furthermore, you can use the STORE statement to store the model and use PROC PLM to perform scoring, visualization, and other post-fitting analyses.

As a motivating example, let's create parameter estimates by using multiple imputations. The documentation for PROC MIANALYZE has an example of using PROC MI and PROC MIANALYZE to estimate the parameters for a logistic model. The following data and analysis are from that example. The data are lengths and widths of two species of fish (perch and parkki). Missing values are artificially introduced. A scatter plot of the data is shown. 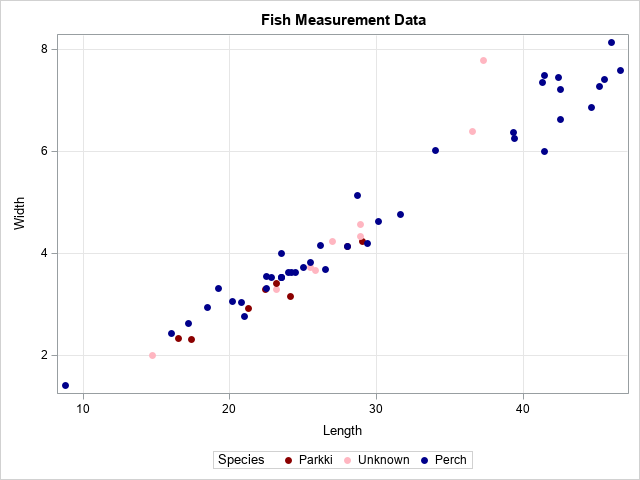 The analyst wants to use PROC LOGISTIC to create a model that uses Length and Width to predict whether a fish is perch or parkki. The scatter plot shows that the parkki (dark red) tend to be less wide than the perch of the same length For a fish of a given length, wider fish are predicted to be perch (blue) and thinner fish are predicted to be parkki (red). For some fish in the graph, the species is not known.

The parameter estimates from PROC MIANALYZE are shown. The question is: How can you use PROC LOGISTIC and PROC PLM to score and visualize this model, given that the estimates are produced outside of PROC LOGISTIC?

Get PROC LOGISTIC to use external estimates

As mentioned earlier, a solution to this problem is to use the INEST= option on the PROC LOGISTIC statement in conjunction with the MAXITER=0 option on the MODEL statement. When used together, you can get PROC LOGISTIC to evaluate any logistic model you want, and you can use the STORE statement to create an item store that can be read by PROC PLM to perform scoring and visualization.

You can create the INEST= data set by hand, but it is easier to use PROC LOGISTIC to create an OUTEST= data set and then merely change the values for the parameter estimates, as done in the following example: 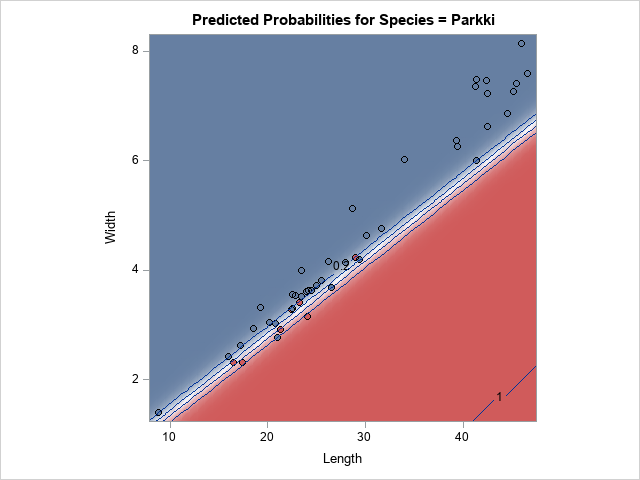 Because PROC LOGISTIC writes an item store for the model, you can use PROC PLM to perform a variety of scoring tasks, visualization, and hypothesis tests. The following statements create a scoring data set and use PROC PLM to score the model and estimate the probability that each fish is a parkki: 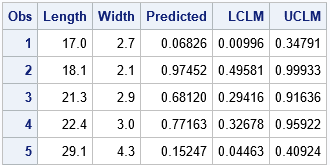 According to the model, the first and fifth fish are probably perch. The second, third, and fourth fish are predicted to be parkki, although the 95% confidence intervals indicate that you should not be too confident in the predictions for the third and fourth observations.

Thoughts on other regression procedures

Unfortunately, not every regression procedure in SAS is as flexible as PROC LOGISTIC. In many cases, it might be difficult or impossible to "trick" a SAS regression procedure into analyzing a model that was produced externally. Here are a few thoughts from me and from one of my colleagues. I didn't have time to fully investigate these ideas, so caveat emptor!

This article shows how to score parametric regression models when the parameter estimates are not fit by the usual procedures. For example, multiple imputations can produce a set of parameter estimates. In PROC LOGISTIC, you can use an INEST= data set to read the estimates and use the MAXITER=0 option to suppress fitting. You can use the STORE statement to store the model and use PROC PLM to perform scoring and visualization. Other procedures have similar options, but there is not a single method that works for all SAS regression procedures.

If you use any of the ideas in this article, let me know how they work by leaving a comment. If you have an alternate way to trick SAS regression procedures into using externally supplied estimates, let me know that as well.