The triangulation theorem for polygons says that every simple polygon can be triangulated. In fact, if the polygon has V vertices, you can decompose it into V-2 non-overlapping triangles. In this article, a "polygon" always means a simple polygon. Also, a "random point" means one that is drawn at random from the uniform distribution.

An algorithm to generate random points in a polygon

Suppose that a polygon or any other planar region is decomposed into k triangles T1, T2, ..., Tk. If you want to generate N random points uniformly in the region, the number of points in any triangle should be proportional to the area of the triangle divided by the total area of the polygon.

One way to accomplish this is to use a two-step process. First, choose a triangle by using a probability proportional to the relative areas. Next, generate a random point in that triangle. This two-step approach is suitable for the SAS DATA step. At the end of this process, you have generated Ni observations in triangle Ti.

An equivalent formulation is to realize that the vector {N1, N2, ..., Nk} is a random draw from the multinomial distribution with parameters p = {p1, p2, ..., pk}, where pi = Area(Ti) / (Σj Area(Tj)). This second formulation is better for a vector languages such as the SAS/IML language.

Therefore, the following algorithm generates random points in a polygon:

Notice that Steps 2-4 of this algorithm apply to ANY collection of triangles. To make the algorithm flexible, I will implement the first step (the decomposition) in one function and the remaining steps in a second function.

Triangulate a convex polygon in SAS

There are various general methods for triangulating a polygon, but for convex polygons, there is a simple method. From among the V vertices, choose any vertex and call it P1. Enumerate the remaining vertices consecutively in a counter-clockwise direction: P2, P3, ..., Pk, where k = V-2. Because the polygon is convex, the following triangles decompose the polygon: 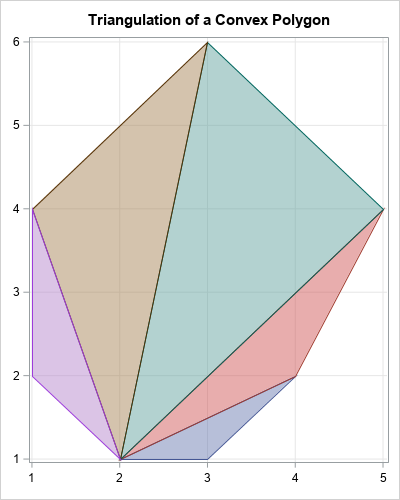 To illustrate the process, I've included a graph that shows a decomposition of the convex hexagon into triangles. The triangles are returned in a list. The next section shows how to generate uniform points at random inside the union of the triangles in this list.

Generate random points in a collection of triangles

This section generates random points in a union of triangles. The following function takes two arguments: the number of points to generate (N) and a list of triangles (L). The algorithm computes the relative areas of the triangles and uses them to determine the probability that a point will be generated in each. It then uses the RandUnifTriangle function from the previous article to generate the random points.

The z vector is an N x 3 matrix. The first two columns contain the (x,y) coordinates of N random points. The third column contains the ID number (values 1,2,...,k) that indicates the triangle that each point is inside of. You can use the PolyDraw function in the Polygon package to visualize the distribution of the points within the polygon: 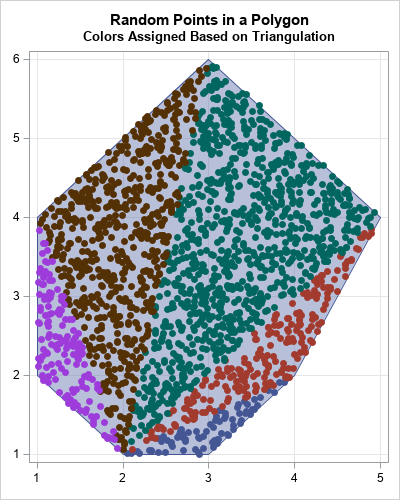 The color of each point indicates which triangle the point is inside. You can see that triangles with relatively small areas (blue and purple) have fewer points than triangles with larger areas (green and brown).

This article uses functions in the Polygon package. Installing and loading a package is a way to define a set of related functions that you want to share. It is an alternative to using %INCLUDE to include the module definitions into your program.

You can download the complete SAS program that performs the computations and creates the graphs in this article.