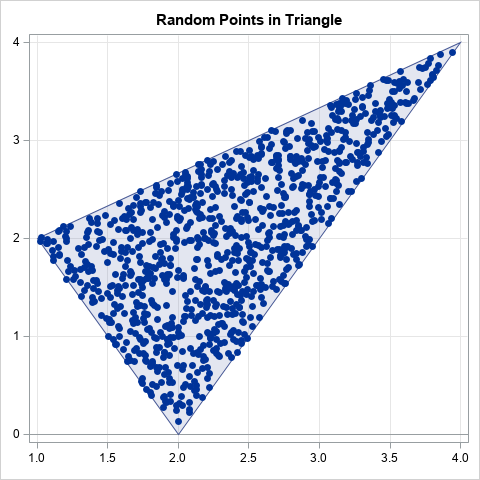 How can you efficiently generate N random uniform points in a triangular region of the plane? There is a very cool algorithm (which I call the reflection method) that makes the process easy. I no longer remember where I saw this algorithm, but it is different from the "weighted average" method in Devroye (1986, p. 569-570). This article describes and implements the reflection algorithm for generating random points in a triangle from the uniform distribution. The graph to the right shows 1,000 random points in the triangle with vertices P1=(1, 2), P2=(4, 4), and P3=(2, 0). The method works for any kind of triangle: acute, obtuse, equilateral, and so forth.

In this article, "random points" means that the points are drawn randomly from the uniform distribution.

Random points in a parallelogram 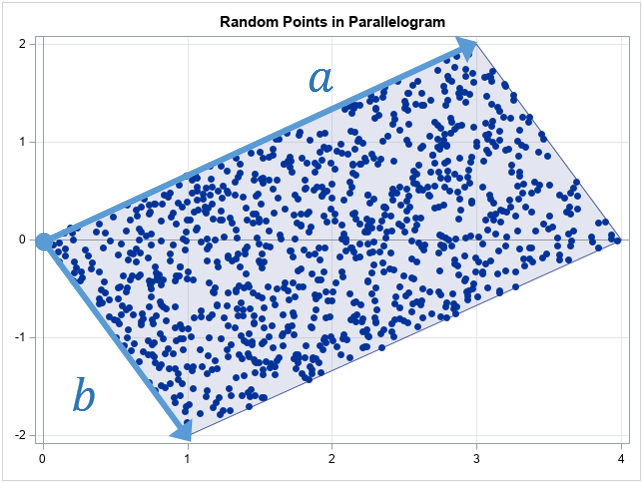 The following SAS/IML program generates 1,000 random points in the parallelogram. The graph is shown above.

This is shown in the following graph. The blue points are the points for which u1 + u2 ≤ 1. The red points are for u1 + u2 > 1. When you form v1 and v2, the red triangle get reflected twice and ends up on top of the blue triangle. The two reflections are equivalent to a 180 degree rotation about the center of the parallelogram, which might be easier to visualize. 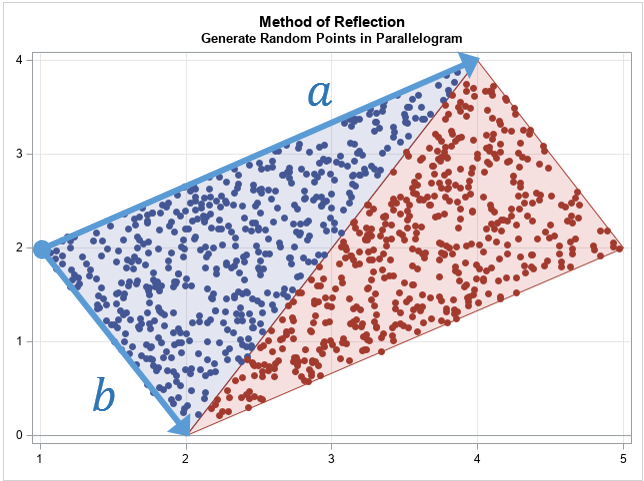 Generate random points in a triangle

The graph of the 1,000 random points appears at the top of this program.

As written, the programs in this article create scatter plots that show the random points. To improve the exposition, I used the polygon package to draw graphs that overlay the scatter plot and a polygon. You can download and install the polygon package if you have PROC IML with SAS 9.4m3 or later. You can download the complete SAS program that performs all the computations and creates all the graphs in this article.

In summary, this article shows how to generate random uniform points in a triangle by using the reflection algorithm. The reflection algorithm is based on generating random points in a parallelogram. If you draw the diagonal of a parallelogram, you get two congruent triangles. The algorithm reflects (twice) all points in one triangle into the other triangle. The algorithm is implemented in SAS by using the SAS/IML language, although you could also use the SAS DATA step.