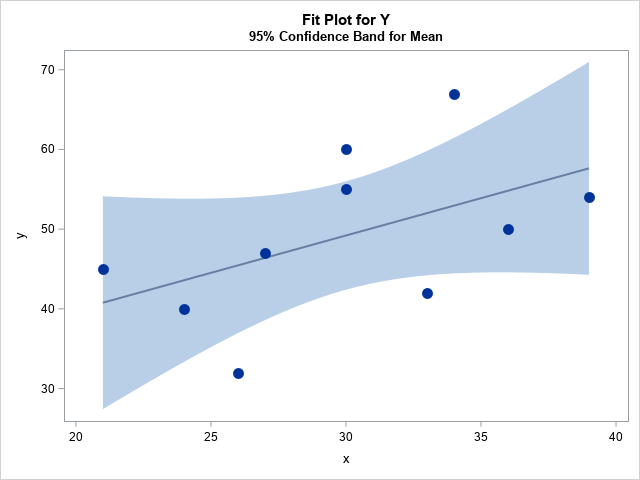 You've probably seen many graphs that are similar to the one at the right. This plot shows a regression line overlaid on a scatter plot of some data. Given a value for the independent variable (x), the regression line gives the best prediction for the mean of the response variable (y). The light blue band shows a 95% confidence band for the conditional mean.

You can use a simulation to demonstrate the relationship between a confidence interval and repeated random sampling. The best way is to use a (known) model to repeatedly generate the random sample. However, I am going to use a slightly different approach, which is discussed in Section 13.3 of Simulating Data with SAS, Wicklin (2013). When you deal with real data, you don't know the real underlying relationship between the response and explanatory variables, but you can always simulate from the fitted regression model. This means that you fit the data and then using the parameters estimates as if they were the true values of the parameters.

Let's see how this works. The following DATA step defines a toy example that has 10 observations. The call to PROC REG fits a linear model to the data.

The REG procedure creates a fit plot that is similar to the one at the top of this article. The model is Y = b0 + b1*x + eps, where eps ~ N(0, s). The call to PROC PRINT shows the three parameter estimates: the intercept term (b0), the coefficient of the linear term (b1), and the "root mean square error," which is the estimate of the standard deviation of the error term (s).

The conditional mean is assumed to be normally distributed inside the confidence band. For a particular value of x, the probability of the conditional mean is high near the regression line and lower near the upper and lower limits. You can visualize the distribution by overlaying confidence bands for various confidence levels. If you make the bands semi-transparent, the union of the bands is darkest near the regression line and lightest far away from the line.

In SAS, you can use the REG statement (with the CLM option) in PROC SGPLOT to overlay several semi-transparent confidence bands that have different levels of confidence. The following graph overlays the 95%, 90%, 80%, 70% and 50% confidence bands. To save typing, I use a SAS macro to create each REG statement. 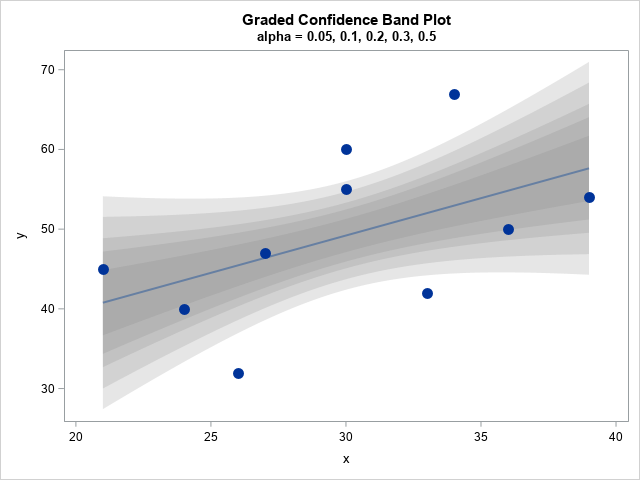 Claus O. Wilke calls this a "graded confidence band plot" in his book _Fundamentals of Data Visualization_ (Section 16.3). It communicates that the location of the conditional mean is uncertain, but it is most likely to be found near the regression line.

The careful reader will notice that the graded band plot is created by using multiple REG statements. This implies that the same regression model is fit multiple times, which is not efficient. You can use PROC PLM or PROC IML if you want to fit the model once and then produce many confidence bands.

Simulate from the fitted model

The confidence band visualizes the uncertainty in the prediction due to the fact that the data are a random sample from some unknown population. Although we don't know the underlying true relationship between the (x,y) pairs, we can simulate random samples from the fitted linear model by using the parameter estimates as if they were the true parameters. The following SAS DATA step simulates 500 random samples from the regression model. The x values are fixed. The y values are simulated according to Y = b0 + b1*x + eps, where eps ~ N(0, s).

The output from PROC REG is 500 pairs of parameter estimates (b0 and b1). Each estimate represents a regression line for a random sample from the same linear model. Let's see what happens if you overlay all those regression lines on a single plot: 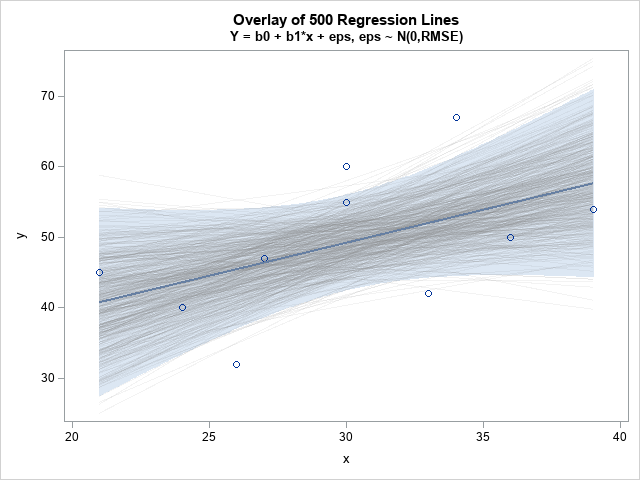 This is the intuitive meaning of the confidence band. If you imagine obtaining a different random sample from the same population and fitting a regression line, the conditional mean will be contained in the band for 95% of the random samples.

The distribution of the conditional mean

As I said earlier, you should think of the confidence bands as a bunch of vertical confidence intervals. The distribution of the conditional mean within each vertical slice is assumed to be normally distributed with mean b0 + b1*x. The following histograms show the distribution of the predicted means for x=21 and x=39 (respectively) over all 500 regression lines. You should compare the 2.5th and 97.5th percentiles for these histograms to the vertical limits (at the same x values) of the confidence band in the graph at the top of this article. 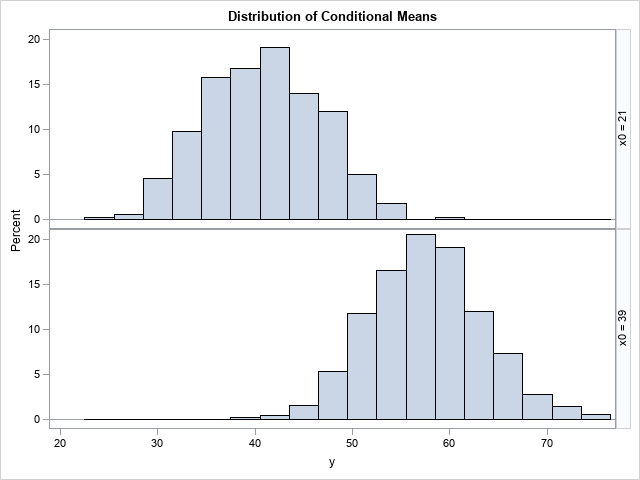