During an epidemic, such as the coronavirus pandemic of 2020, the media often shows graphs of the cumulative numbers of confirmed cases for different countries. Often these graphs use a logarithmic scale for the vertical axis. In these graphs, a straight line indicates that new cases are increasing at an exponential rate. The slope of the line indicates how quickly cases will double, with steep lines indicating a short doubling time. The doubling time is the length of time required to double the number of confirmed cases, assuming nothing changes.

The data in this article are the cumulative counts for COVID-19 cases in four countries (Italy, the United States, Canada, and South Korea) for the dates 03Mar2020 to 27Mar2020. You can download the data and SAS program for this article.

A log-scale visualization of the cumulative cases

You can use PROC SGPLOT to visualize these data. The following graph plots the total number of cases, but uses the TYPE=LOG and LOGBASE=10 options to specify a base-10 logarithmic axis for the counts: 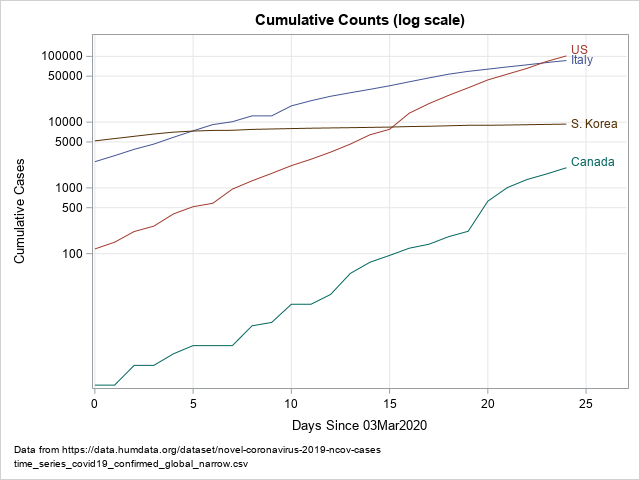 This graph is sometimes called a semi-log graph because only one axis is displayed on a log scale. A straight line on a semi-log graph indicates exponential growth. However, all exponential growth is not equal. The slope of the line indicates how quickly the growth is occurring, and the doubling time is one way to measure the growth. A line with a steep slope indicates that the underlying quantity (confirmed cases) will double in a short period of time. A line with a flat slope indicates that the underlying quantity is not growing as quickly and will take a long time to double. For these data, the visualization reveals the following facts:

An estimate of the slope at the end of each curve

Some researchers fit a linear regression to all values on the curve in order to estimate an average slope. This is usually not a good idea because interventions (such as stay-at-home orders) cause the curves to bend over time. This is clearly seen in the curves for Italy and South Korea.

You can get a better estimate for the current rate of growth if you fit a regression line by using only recent data values. I suggest using data from several previous days, such as the previous 5 or 7 days. You can use the REG procedure in SAS to estimate the slope of each line based on the five most recent observations:

The Est data set contains estimates of the slope (and intercept) for the line that best fits the recent data. The estimates are shown in a subsequent section.

An estimate of the doubling time

Estimate the doubling time from the slope

The following SAS DATA step estimates the doubling time by using the slope estimates at the end of each curve (Day 24):

You can visualize the doubling times by adding an arrow to the end of each curve:

The arrows are shown in the following visualization, which excludes South Korea: 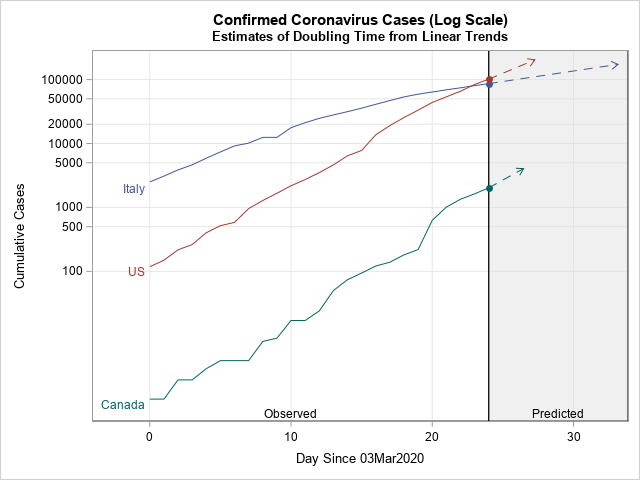 This graph shows how quickly the US and Canadian counts are predicted to double. The tip of each arrow indicates the time at which the number of cases are predicted to double. For the US and Canada, this is only a few days. The arrow for Italy indicates a longer time before the Italian cases double. Again, these calculations assume that the number of cases continues to grow at the estimated rate on Day 24. Because the curve for Italy appears to be flattening, the Italian estimate will (hopefully) be overly pessimistic.